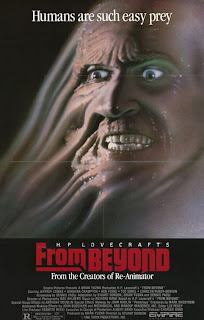 "Can't you feel it Crawford? In the mind? The mind! I want to see more...more, than any man has ever seen." Given the brightly saturated pink/blue mise-en-scene of Stuart Gordon's From Beyond (something far more compositionally ambitious than anything from his previous Frankenstein-mythology masterpiece Re-Animator), one might be inclined to think deranged Dr. Edward Pretorius (Ted Sorel) speaks for Gordon, himself. If From Beyond's first few minutes beg visual comparison to Dario Argento's Suspiria, little else following tries to match in terms of color scheme - a shame, since Gordon exhibits such prowess for candy colored expressionism. The bulk of the film succumbs to this fault as well, often opting for Cronenberg-lite feats of body horror and phallic/vaginal joshing over sustained artistry - nothing really comes close to matching Videodrome's abject madness (aside from a brain suck through the eye socket).

Nevertheless, From Beyond holds its own as one of the staple horror films of the 1980's, in equal thanks to Gordon/producer Brian Yuzna's delirious sensibilities and the still-cult-but-should-be-famous cast, namely Jeffrey Combs, Barbara Crampton, and Ken Foree, though the latter is misused with too many trite "I'm a black man," moments. Combs, now the misunderstood victim of Pretorius' experiments to stimulate the brain's pineal gland (which, he believes, will open a "third eye" to a parallel universe), takes wunderkind psychiatrist Katherine (Crampton) and former football player turned police officer Bubba Brownlee (Foree) to his lab to prove his sanity - operating a resonator which, when activated, brings squid-like alien beings into view and, even better, arouses sexual desire. The latter explains Crampton eventually slapping on some S&M gear to "play" with a now hairless Combs - a sequence which should have ascended her to "scream queen" superiority. Her sexy-cute countenance outdoes anything from victims-turned-super-bitches Jamie Lee Curtis or Sigourney Weaver, yet she lacks the renown. Had the film's script been a bit tighter (omitting the pudgy next-door neighbor with the silly hairnet and dog would have been a start) and Gordon fully committed to topping Re-Animator, not just in terms of gore and make-up ingenuity (which he unquestionably does), but with richer potential for subtext, maintaining visual ambition, and constructing fully-fledged comedy, there is no reason to think he couldn't have.

Posted by Clayton Dillard at 4:25 PM