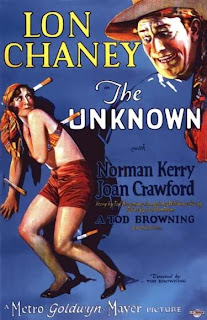 The most chilling dimension of Tod Browning's silent masterpiece The Unknown may be that it lacks any discernibly "horrific" visuals or characters; Browning explores the potential wrath of human desire, the lengths of physical disfigurement, psychological anguish, and emotional torment capable when faced with the irrational pursuit of love, egoism, and unconscious self-effacement. Though without the nocturnal vampirism of Dracula, or the macabre veracity of Freaks, it's Browning's most psychologically taut and haunted film. Of course, Browning penetrates these themes with an absurd narrative, attaining all the more frightening depth because of it.

Lon Chaney plays Alonzo, an armless circus performer who covets Nanon (a young Joan Crawford), a beauty who's sickened by the touch of a man's hands - she's been taken advantage of and subjugated to the point of physical repulsion. Naturally, she's drawn to the kind, non-groping Alonzo. Via a surprising reveal and a disturbing decision, Browning's themes become apparent, but little of The Unknown's embittered fatalism comes simply from narrative mechanics. Moreover, Browning's preferred discursive mode (disfigurement/the other) reinforces the fragility of the physical human form and, following, the human mind, the dichotomous pull of ego and self-hatred. Obsessive, transgressive impulses compounded by societal restraint leads to self-destruction in the name of self-fulfillment. The allegorical dimension is endlessly fascinating and torturous. Chaney's astounding, seemingly limitless capability to emote such fiery desires and pains facilitates Browning's breathtakingly humanist and expressionist clarity. It's an incredible film that deserves rank amongst the most distinctive visions of the silent era. 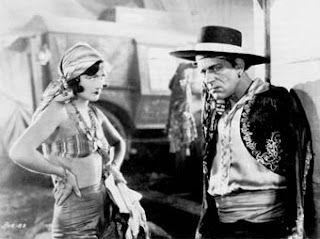 Posted by Clayton Dillard at 9:54 AM