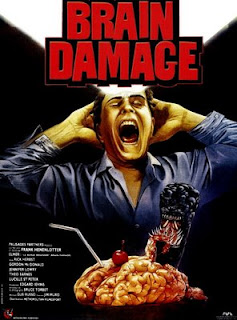 Brain Damage teeters on brilliance throughout and deserves uncontested admission into the canon of definitive 80's horror. It is certainly director Frank Henenlotter's most passionate film, reaching for something beyond the goofy abjection of Basket Case, or (following this film) the full-on farce of post-80's subculture in Frankenhooker. Brain Damage responds to the drug use, sexual disease, and greed of a moral wasteland (here NYC) further devolving with each passing day - only it does so via a twelve inch slimy creature, who talks like Burl Ives and hooks his victims on "brain" juice in exchange for being given the chance to eat other human brains. The social metaphor is clear: (lest I mention Aylmer, the creature, is shaped like a grotesque cock) human reliance on the destruction of others (metaphorical cannibalism) because of self-imposed constraints, defines the era's mores. Many people will refuse to view it as anything more than a campy monster flick - such impertinence reinforces the self-effacing behavior the film laments.

Aylmer, a Faust-like symbol for Phallocentric order, looks and speaks like a character from Sesame Street, his soothing voice supplementing a gross, dumbass expression. His uncanny physicality makes sense, given the film's inherent critique of self-mutilation through secondary hunger drives. The cute children's show turns into a violent, absurdist reality for Brian (Rick Hearst), a 20's-something turned to addiction as a means of escaping boredom (his name, a letter switch away from "brain," solidifies him as locus of the broader populous' desires). Brian craves a psychedelic reality to replace his own - yet that immersion obfuscates his role in Aylmer's persistent hunger and destruction. The film's best sequence takes place in an underground punk club (named Hell), where tripping Brian catches the eye of a busty broad. Persistent, she takes him in the basement, unzips his pants, and is "choked" to death by Aylmer, doubling because of his phallic shape. The metaphor expands (pun intended), here its physicality normal to her touch, yet becoming abject when seen, diseased instead of "properly" functional. Another scene on a subway situates Brian's state - taken over by disease, compelled by a thirst for another high. The apocalyptic ending (echoes of Kiss Me Deadly abound) lends little closure to destruction run amok, but it cements Henenlotter's vision and very specific taste - both darkly humorous and morally conscious.

Posted by Clayton Dillard at 2:24 PM