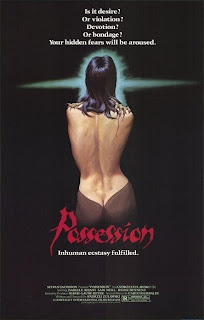 The examination of uncommunicable anxiety, self-hatred, and human misery in Andrzej Zulawski's Possession runs horrifyingly deep, plummeting into what lead actress Isabelle Adjani deemed "psychological pornography." Apropos in particular for Adjani, whose character Anna is in the midst of nervous breakdown as the film begins, and proceeds to only fall further into madness. Zulawski directs with specified movements and motions in mind, often tracking with his characters as they walk, perhaps pulling back and then pushing in during a phone call, or match cutting to capitalize on actors movements - dynamism defines nearly every shot or sequence. There are no conventional takes; conversations between people puts them in disjointed relationship to one another - the simple act of walking across the room transcends the mundane because of Zulawski's insistence on giving his film a definitive feel and style. It is fitting, too, for the expulsion of emotional rage and fear. However, none of these stylistic flourishes even begin to encompass the film's visceral and cerebral foundation, grounded ultimately in the horror film, allegorical for the deterioration of marriage and happiness - and the dead end faced when those feelings cannot be dealt with in a rational way. They must, necessarily, take a monstrous, non-human form. 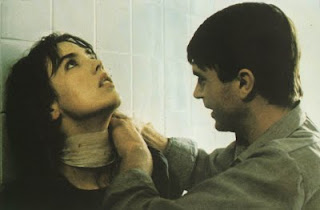 The ideas in Possession materialize out of unconscious desires and their momentum (that it is set in Berlin begins to explain unspoken anxieties); there are no expository scenes or exchanges. Adjani speaks in abstract, non-concrete terms, desperately trying to pinpoint her "monstrous" interior, what makes her want to revolt and leave husband Mark (Sam Neill). Her response: self-mutilation and seclusion. Mark initially thinks it is purely sexual - he locates her new lover Heinrich (Heinz Bennent), a philosophical German who, when confronted with Mark's hostility, beats the shit out of him. Mark hires a private detective to track Anna, discovering her hideout and, more importantly, her true new lover. Yet these elements do not define the film's power; that comes from camera fluidity, unhinged and uninhibited performances from Sam Neill and, in one of the most emotionally wrought performances since Maria Falconetti in The Passion of Joan of Arc, Isabella Adjani, and thematic interest, primarily religious asceticism and a fear of sin, guilt and doubt in the traditional sense. There are certainly echoes of Polanski's Repulsion, but Zulawski's more disturbed and insistent on getting as far into Anna's breakdown as possible. The film's most famous sequence, where Anna has a miscarriage in a subway is, to steal a term from Carol Clover, "abject terror personified." 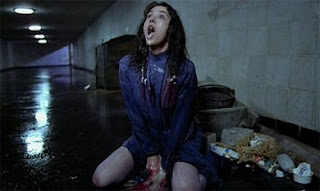 Possession cannot be easily explained, nor could it be easily forgotten. If the film has any problem, perhaps it is too elliptical, the questions and dialogue of the characters too abstract and metaphysical. However, that criticism can be easily dispelled by the tone, which deftly oscillates between solemn and satirical, straight-faced and knowledgeably hysterical. Anna's madness is communicated with such clarity, that laughter is the only tool that can be used to prevent a full-on immersion into her instability. This is not to say the film doesn't consistently stun in a disturbing manner - it does so frequently, but it isn't so detached from the variations of human emotion (like, say, Michael Haneke or Lars Von Trier) to rule out the possibility of humor. At one point, Anna sits, attempting to talk out her uncertainties. This, in particular, is worth noting: "I know there is a third possibility, like cancer or madness. But cancer or madness contort reality. The possibility I'm talking about pierces reality." These points of ponderance do not provide tangible explanations for her anxieties - in a sense, they only complicate her more, desperately trying to solve or locate the problem simply devastates her further. The film's ending helps to clarify the metaphor, but nothing is settled or complete. Violence and procreation are intertwined, the artifice of Anna's "birth" a false solution to her psychological imprisonment - yet given the smiling, but abject face it takes, perhaps a suitable out to end her insufferable pain.

Posted by Clayton Dillard at 11:04 AM