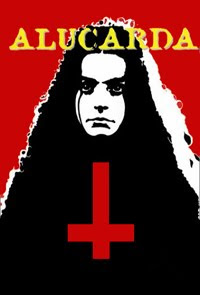 Evaluating Juan López Moctezuma's Alucarda in an identical manner to, say, L'Avventura seems a counterintuitive critical move. That is to say that Moctezuma's religious hysteria cum lesbian vampirism tale does not operate under the same aesthetic codes. It is an exploitation film. To steal a term from scholar Mikel Koven, it is "vernacular cinema," a specific cinematic language geared towards a rural, working class audience looking for a conflation of bourgeois taste. It is a subversive film in that sense, lurid and silly, operatic and outrageous. There is no pretension of "art," nor does it have the visual astuteness (composition, fluidity, verisimilitude) commonly associated with "good" films. Yet, for this "vernacular cinema," libidinous content replaces compositional artistry - Alucarda is loaded with the former and because Moctezuma appropriates such outrageous titilation, there's a charming brashness to his disregard for decorum and taste. 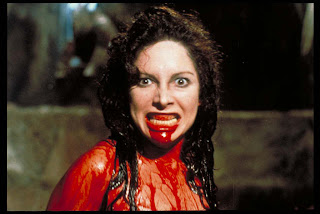 Justine (Susana Kamini) arrives at a convent following the death of her parents. She makes friends with Alucarda (Tina Romero), a strange young girl who, as she learns, is likely possessed by Satan. Dialogue remains stilted and abstract to prove the art film's pretension: "Funerals frighten me," states Justine. Alucarda responds: "You have to die. Everybody has to die." Whether or not Moctezuma intends the dialogue to be explicit in its silliness is beside the point - it's effectively critical of those who hypocritically hail The Exorcist, yet scoff away Alucarda's honesty: sex, lesbianism, blood and blasphemy without the guise of a complex moral or spiritual statement. Thus, when the unseen (but moaning, sonically present) devil is unleashed, Alucarda and Justine are driven to a taste for blood, stripping naked, giving themselves to Satan, and coming just short of full-on lesbian action. A later crucifixion and penultimate resurrection (with Justine, naked and covered in blood) comprise the film's most memorable atrocities, specifically in how they deconstruct (and acknowledge) cinematic thirst for carnal destruction, pain and pleasure (and thus explaining why the bourgeois systematically reject such films). Alucarda's final flourish of satanic fury (most certainly influenced by Carrie) can't match De Palma's visceral mastery (his subversion runs deeper than Moctezuma's), but through the barrage of screams, quick zooms and fiery chaos, Alucarda certainly deserves cult recognition as one of the more potent "monstrous-feminine" tales.

Posted by Clayton Dillard at 6:21 PM