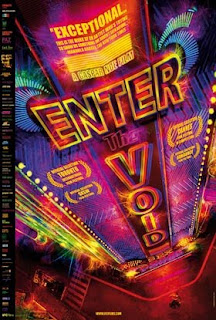 It's telling that Gaspar Noé chooses a lengthy "aerial" take over a miniature model of Tokyo to end Enter the Void, the faux-provocateur's latest attempt to prove himself the biggest douchebag on the planet. Telling because what has preceded, in spite of its point of view shifting, psychedelic interludes, and fractured chronology, is little more than facile sadism, puerile through and through, an immature brat's misanthropy played out via techno beats, strobe lights, and childhood trauma. If one were to ask the director what his film is about, he'd no doubt give an abstract, existential and, ultimately, meaningless answer, much like the laughable philosophy speak of his one-note druggie drones, fetishized to his satisfaction through either an uber-hip, thin and streamlined physique (the protagonist) or a thick-accent, glasses and beard (the cool best friend). Nothing, as hard and straight-faced as Noé may try, can be taken seriously here.

Nor should it be taken lightly, given his shockingly textbook misogyny (this is easily the most hateful film against women since...Irreversible). And, let me tell you, it comes in a variety of forms. The framework of the narrative involves Oscar (Nathaniel Brown), an American drug-dealer living in Tokyo. On the way to bring a friend "his stash," Oscar is confronted by police, runs into a bathroom stall, and is shot dead. The catch to all of this is that the entire sequence leading up to his death, has been entirely from his perspective (a la Robert Montgomery's Lady in the Lake). Preceding his death, he discusses drugs and religion with Alex (Cyril Roy), a friend who admits his interest in Oscar's sister Linda (Paz de la Huerta) - she figures in later. All of the conversation is purely from Oscar's point of view (there are "blinks" too, a cute but dumbass technique). They dissect drug culture with knowledgeable aplomb. Yet it's purely masturbatory for both themselves and the director, eroticizing and idealizing their consumptive urges, not moral lack (something Noé is apparently oblivious to). Everyone is degraded here. Especially the women - a thread that becomes readily apparent following Oscar's death and - subsequently - his reincarnation.

His death allows the film to leap backwards, to both Oscar and Linda's childhood. Noé gets off on psychosexual, pop-Freudian intimations, integrating an Oedipal element that's played by the director as if this shit were brand new. Oscar ogles his mom in the bathtub, later reminiscing about when she breastfed him. Mouth to tit themes play a major role here. He's also into his sister, especially after his parents are hilariously killed in a car accident, hit head-on by a semi-truck going the wrong way down a one-way street. The children scream their asses off in the back seat, covered by their parents' blood. The trauma (repressed, haunting memory) leads to sexual dysfunction (the desire to fuck his sister). However, Noé well oversteps the endline by suggesting that Linda, even in her grown-up state of psychological dejection, actually wants to hook up with Oscar way more than he wants to with her! Needless to say, her low self-esteem eventually finds her dancing in a strip club, ultimately letting her boss Mario (Masato Tanno) have his way with her backstage. Through another shift in pov, it's suggested (ramping up the incest themes again) that Oscar's ghost enters Mario while he has sex with her. This echoes the earlier conversation with Alex in which Oscar uttered, "do you believe in reincarnation," a dopey, desperate ploy to add depth to what is, essentially, just Noé getting his rocks off at his own "brilliance" and perversity.

The narrative shifting recounts exactly how Oscar and Linda came to Tokyo, further setting up their devastating histories. Yet there's never any sense, whatsoever, that all of the film's jumbled chronology, multiple immersions down the "rabbit hole" a la 2001: A Space Odyssey and familial destruction is ever doing anything more than congratulating its own cynical, debased self-indulgence, glibly addressing human pain and struggle with all the depth of a second year MFA student film. One of the film's last sequences, in which an earlier referenced hotel model becomes the real thing, is sure to spark the most debate as to its "meaning." Moreover, its controversial (though pretty tame), non-simulated sex may raise a few eyebrows, particularly an inner-vagina cumshot (Noé can take the pov of a woman's pussy, but never her mind). It's just more guttersnipe juvenilia, effectively constructed only by the most superficially audacious inclinations. He even throws in the typical "get the fuck out of my house!" screaming, as well as the proverbial "if you ever come in here again, I'll fucking kill you." There's no tongue-in-cheek jousting here folks - Noé's just got his tongue up his own ass, stroking his ego through a pretentious visual style and brash, mindlessly hateful (towards women and, basically, mankind) amoral aesthetics.

Posted by Clayton Dillard at 8:13 PM