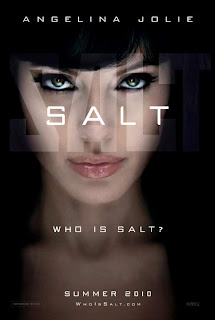 Admittedly, Salt has low aspirations. It's political narrative and jargon-driven dialogue functions as a vehicle for Jolie's face and body to kick some ass. Yet don't sell short the art of ass kicking. Evelyn Salt (Jolie) faces immediate danger when a walk-in Russian officer (Daniel Olbrychski) fingers her as an undercover mole who will kill the Russian president within the next 24 hours (the other CIA officers believe the guy, since a neuroscan says he's telling the truth). Fearing capture (and the safety of her husband), Evelyn flees, launching every DC area protection official into fully-armed pursuit. What initially seems like hollow chase sequences proves merely as building blocks for later audacity - all anchored by Jolie as vessel, emoting, punching, kicking, and leaping when Kurt Wimmer's script calls for it. Thankfully, she doesn't drudge out the histrionic hilarity of A Mighty Heart and Changeling; Noyce allows her to cry and raise her voice once or twice, but it's in service of a greater understanding in what makes his film function on a visceral level. It's her bursts of energy (even just telling expression) rather than constant highs that energize the progressively balletic shootouts and explosions.

Noyce opts for straight-faced genre satire over smarmy one-liners, elevating his sense of style over something like Adam McKay's The Other Guys, since he doesn't have to consciously acknowledge himself as higher than the genre he's working in - but there's never any doubt of his grasp on the film's intent and effectiveness. Unfortunately, James Newton Howard's wholly routine score is the weak link, denying the film from being a truly unique experience. What makes Christopher Nolan's Inception such a sensual tour de force (at least half of it), is Hanz Zimmer's thematic music, gloriously punctuating action and emotion without becoming literal. The aural component is nearly equal to the visual. Conversely, one could easily watch Salt without even recognizing a score, as it worthlessly stays out the way. Nevertheless, the film's plot reversals and uncertain character motives work nicely in tandem with Noyce's preference for orchestrated action and movement.
Posted by Clayton Dillard at 2:01 PM