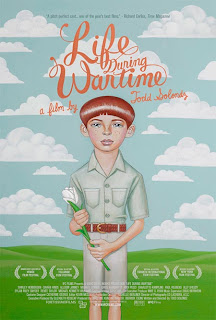 The grandiose title of Todd Solondz's Life During Wartime succinctly and immediately conveys just how placid and unchallenging modern American filmmaking has become. Hardly a period-piece side road for the American psyche provocateur, the film picks up the characters from 1998's Happiness, only ten years have passed, though not much has changed in the course of their often miserable struggle for the first film's titular idealism. Instead of bringing back all of the original film's actors, however, Solondz recasts the entire film (the oddest recasting has to be Michael K. Williams for the crank calling pervert originally played by Phillip Seymour Hoffman), further fulfilling his well-earned role as cinematic anarchist. Yet his act isn't merely muckraking, certainly not condescension. A huge mistake most of the filmmaker's detractors often make is asserting his contempt for his subjects. Solondz masterfully, brilliantly refuted those criticisms in Storytelling (his masterpiece) and he further dispels such knee-jerk conclusions here, honing contemporary socio-cultural anxiety, then examining it with his trademark blend of challenging fearlessness.

Reoccurring motifs explicate Solondz's formal rigorousness. The film opens on Joy (Shirley Henderson) having dinner with her now-husband Allen (Michael K. Williams), mirroring Happiness's opening. Moreover, the writing is sharper now, even in the simplest of exchanges. Confessing the relinquishing of his desires, Allen states, "I've given up crack. I've given up cocaine. I've given up crack cocaine," all while interjecting cuts of Joy, nodding, unemotionally placating. Solondz's sense of comedic timing comes through editing, deftly reflecting the pain and struggle of his subjects, but, in turn, relishing their humanity, the inherently humorous absurdity of humanity's seemingly neverending, existential pursuits. In the next scene, Trish (Allison Janney) has dinner with Harvey (Michael Lerner), yet another dating attempt to forget her pedophile husband Bill (Cieran Hinds), just serving the end of his sentence. Dinner becomes a key act. The film is a series of conversations, most taking place over a meal. Solondz establishes public space/public domestic space, a place where identity falsely changes into expectation, hope, and aspiration. A later scene over dinner with Harvey, Trish and her soon-to-be-bar mitzvahed son Timmy (Dylan Riley Snyder) is violated Harvey's son Mark (Rich Pecci), who frankly explains when asked if he's seeing anyone, "No. I'm more focused on China. Everything else is history. It's just a question of time." Honesty breaks illusion, negating specified functions of spaces. Solondz offsets this with private space (the bedroom). This holds his subjects true interests, where they go to be themselves, have sex, retreat to the things they cannot openly express/confess. Half a dozen tracking shots reveal the walls of rooms, often cluttered with posters, pop-expressions of individuality. Most notable is the I'm Not There poster in now older Billy's (Chris Marquette) college dorm. The inclusion is directly intertextual to Palindromes, where Solondz chose different actresses (even a young boy) to play the same part. Haynes cheapened that in his film, a hollow, meaningless exercise in celebrity subterfuge, a practice more attractive to youth than Solondz's genuine interest in faces and the difference of human expression. Unlike the recent onslaught of middlebrow indies/sequelitis/remake fervor/comic book clusterfuck, Life During Wartime shatters the facade, exposing their cynical, consumerist nature.

Solondz uses the film's title in a multitude of contexts, none taking on the bombastic tone the title assumes. In fact, Solondz uses such a title to express the inconceivable disconnect between his characters' bourgeois lives and actual warfare. Yet, as the comparison between pedophile and terrorist is made, Life During Wartime suggests that life in its very essence is a sort of chaos, with constant individual struggle to connect to community, the greater whole. Like in Solondz's shocking Welcome to the Dollhouse, the film's title gets a song, converting one art form into another. Joy spontaneously writes the song sitting in her bedroom, a scene that not only gets at art's uselessness as pretentious polemic, but recalls Bunuelian irreverence, as Joy's former lover Andy (Paul Reubens) appears in spirit to ease her guilt. A shelf of her sister's Emmy's sits in the background - at least, until Joy grabs one for a weapon. The relationship is clear. In a world of chaos, the only "weapon" of value is art - the only thing that can order misunderstanding. Yet again, this relationship isn't quite so cut and dry. An Emmy rewards an appeal to mass notions, the very ideas that have his subjects in so much pain. In the middle of the film, Bill talks with Jacqueline (Charlotte Rampling), a woman he meets in a bar. They talk of "winners and losers" and that a loser "always confesses when he's wrong." The visual synecdoche of the Emmy recalls their conversation and further demonstrates the film's tightly constructed narrative. Solondz's meta elements are often just as, if not more, interesting than his subjects, whose helplessness stems from their both their own, self-imposed faults and a need to repress their individuality. Solondz confesses his own anxieties in doing so, and the ticking-time bomb approach necessitates viewer thought, compliance, and reaction.
Posted by Clayton Dillard at 5:48 AM