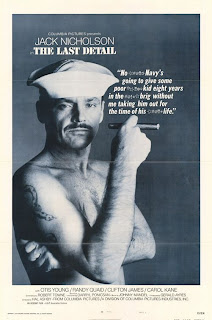 Watching an American masterpiece like Hal Ashby's The Last Detail, one's reminded just how flat and soulless modern filmmaking has become (we have to settle for the far inferior likes of Up in the Air and The Kids Are All Right). But let's not linger on the unpleasant. What makes Ashby's film so lively, so honest, so deeply felt, is its insistence on probing its characters' humanity by way of their masculinity. It remains politically bipartisan. There's no need for political potshots or snarky pointmaking - Ashby and legendary scribe Robert Towne are too mature for that. The duo also wonderfully navigate the American road film, that great sub-genre about existential discovery.

Swabbies "Badass" Buddusky (Jack Nicholson) and "Mule" Mulhall (Otis Young) are responsible for taking soon-to-be dishonorably discharged shy, newbie Meadows (Randy Quaid) to prison, necessitating a multiple day trip by bus and train. The film encompasses that journey, at the onset maintaining a distant, but jovial air, as the veteran officers scoff at their "shit detail." The three start to better understand one another when they go into town, looking to get the underage Meadows a drink. Denied by a bigoted bartender who threatens to call the shore patrol, Nicholson takes out his pistol, slams it on the countertop and shouts, "I am the motherfucking shore patrol, motherfucker! I am the motherfucking shore patrol! Give this man a beer! You're gonna have a fucking beer!" It's a great "Jack" moment, but also plays into the film's interest in masculinity/military decorum. For Badass and Mule, the Navy is a series of learned procedures and attitudes for survival. Meadows's innocence stems from too rigid an adherence to social codes, complicated by the kleptomania for which he's going to jail. Later, while drunk, Badass says, "Fuck fair. Fuck injustice. Haven't you ever wanted to just romp and stomp on someone just to do it? I mean, just to do it, to get it out of your system?" In an era where questions of sexual and physical repression (or lack thereof) were constantly influx, The Last Detail plays positively spiritual in its angst, unearthing the very depths of mixed emotional pursuits of pleasure, existence, and meaning.

The dehumanization of their mission (not to become personally invested in Meadows) conflicts with their compassionate morality. When Badass tells Meadows he'd make a fine signalman late in the film, it's immediately followed with a flash of sorrow and pain. They all realize he's not going to be able to actualize the goal because of his relatively petty past sins. The film's greatest strength lies in the trio's mutual respect and understanding, though their relationship never devolves below its necessary complications - the personal ideologies that separate them. Nicholson's performance marks the height of his career, besting even the likes of J.J. Gittes, R.P. McMurphy, and Jack Torrence. It's an iconic turn, wild, fiery, but most important, wholly human. He's never close to caricature and his control impresses almost more than The Last Detail itself, which is saying something. The film ends almost as it began, but it's best that way, subtly stating the stone-faced modus operandi of the military man. Their faces and attitudes may not reflect change, but it's there, bubbling just beneath the surface. What a glorious work of art.
Posted by Clayton Dillard at 7:16 PM