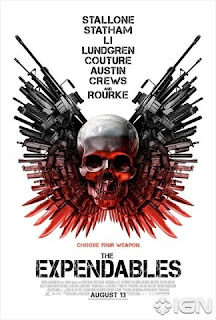 Goddamnit. Proving the impossible just the opposite, Sylvester Stallone's round-up of several action flick heavyweights flat-out sucks. There's just no two ways around it. Substituting choppy editing for compositional artistry, overloading on utterly disintegrating exposition, and - worst of all - woefully short on mano y mano fight sequences, everything about the "shoulda-been-must-see-action-flick-of-all-time" isn't. It's not even the must see film of the week, since Scott Pilgrim vs. The World, far more interesting and ambitious, also opens.

That's not to suggest The Expendables can't be enjoyed; it can, but always with pain and regretful sorrow, as every passing scene further cements Stallone's failure to understand both himself, and his world talent cast (excluding names like Couture and Austin, though the latter isn't half bad). Instead of thinking radically or, who knows, maybe even avant-garde about his testosterone all-stars, Stallone and screenwriter Dave Callaham simply send them into the jungle, searching for a drug kingpin/dictator blah blah blah blah. Why concern oneself with the umpteenth South American drug kingpin in film history, rather than focusing on what everyone's paid to see?

The film never answers that question, though it does let always charismatically dynamic Eric Roberts do his thing as the American billionaire/puppeteer of the operation, but the role's devastatingly underwritten, with hardly a memorable line or even a bombastic monologue. Most insulting, though, is that Stallone doesn't treat the cast with the respect deserved. Not respect as celebrities, but as physical artists, whose movements and presence are exciting in-and-of itself. When hand-to-hand fights do happen between heavies, Stallone doesn't let the action progress within the frame. He starts on one actor, cuts to the other, back to the first actor's hands, back to the second actor's leg, repeat ad infinitum - there's no way to tell what the fuck is going on. How about a two shot, maybe with some camera movement, to let the actors, rather than the editing, deliver the goods? Stallone's prowess as a filmmaker is too dim. Equally frustrating is a car chase in which Jet Li pulls out a machine gun and spurts off rounds at some nameless/faceless baddies. Even here, Stallone misunderstands what's aesthetically/viscerally pleasing. Li needs to be in frame, holding the gun, shooting the gun and cease firing before a cut. Stallone doesn't get (or respect) these basic necessities of direction/composition, instead relying on the loudness of everything to distract.

The Expendables has some "hell yeah" moments, mostly when Terry Crews is firing his big fucking gun, or when Lundgren (the highlight of the cast) decides to leave Stallone and crew to team-up with Roberts. The final showdown/shootout works too, but it's so chaotic in its gunfire, dismembered body parts and blurry face-lifts, that again, it's nearly impossible to enjoy the sensual assault in any coherent manner. You know a flick's not working when it enlists Arnold Schwarzenegger to do a cameo, but lets it seem as though he's reading off cue cards, then has a character state the obvious joke: "I guess he wants to be president someday." Oh, because he's the gov...yeah, I gotcha. Most of the cast comes off looking good (Statham, Lundgren and Roberts definitely still have fuel left), some just alright (Stallone's passable, but physically spent) others shouldn't have been in the movie (Couture's acting, and even physical presence, carry zero weight) and a few prove surprisingly adept (Crews is funny and badass with his gun, Austin at least doesn't suck). Mickey Rourke has two brief scenes, the second pathetic in its desperate attempt to give the film a subtext. "Men aren't like they used to be. Used to be, they had a soul." Ignoring the obvious meta-text, that these men are "expendable" as artists too, that their talents are either seen as inferior or ignored altogether, Stallone's coup de grace for a generation of beloved artists/men falls too far short of the more artful, intelligent send-off they deserve.
Posted by Clayton Dillard at 5:36 PM