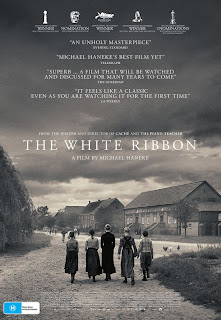 Another Michael Haneke film, another hollow, soulless exercise wallowing in human degradation. Like Lars Von Trier (an equally despicable misanthrope), Haneke dehumanizes his characters to the point that they become mere puppets in a fetishized torture labyrinth, juxtaposing a complex narrative with prosaic setting and characters. Like either version of Funny Games with its contempt and condescension to basically all human life or Cache through its paradox (simple visual style allowing complexity through movement within an often still frame and not editing), the combination of these two sensibilities proves ungainly for Haneke's supposed allegory on pre-WWI fascism, positing the negative reinforcement practices of a priest (Burghart Klaussner) on his children as somehow directly correlating to rising political angst in Germany.

Haneke's narrative is not so simple, however, weaving a dozen or so major characters into the retrospective voice over of a young school teacher (Christian Friedel), who retells the films events as an old man. The plethora of characters serves more for confusion than complexity, compounded by Haneke's insistence on wallowing in each character's anguish, never allowing even the slightest glimmer of hope or happiness. Nor does he restrain himself from bad taste; a mentally retarded child is presented for no other reason than to be the victim of a later punishment; Haneke doesn't mind allowing the child to scream in pain and discomfort as a doctor treats him, going in for a close-up as the capper. Likewise, he addresses childlike curiosity about mortality in utterly brutal ways, as a child probes his nanny (his mother died in childbirth, concurrent with Haneke's contempt for...anything human): "What is death...will you die? Will I die? How do you die?" The scene mirrors an even earlier one, where another of the priest's sons walks across a log suspended above a lake. When the school teacher sees it and ask him what he's doing, the child responds: "I wanted to see if God would kill me." Kitschy shock tactics only stroke morbid inclinations, since Haneke doesn't juxtapose childhood innocence with war and death the way Forbidden Games (1952), Ivan's Childhood (1962), The Spirit of the Beehive (1973), or Come and See (1985) do, revealing the horror of rationality gone awry, man's necessary (and tragic) ability to justify incomprehensible inhumanity, but drawing out childlike innocence and happiness (even only if in small moments), to demonstrate how one loses innocence. Haneke's title refers to purity and righteousness, but it's merely a pretense for humiliation - his role as puppeteer - and never does he reveal tragedy at loss of innocence, only sneering, "the-folly-of-man" polemics.

Visually, The White Ribbon is reminiscent of some of Carl Th. Dreyer's Day of Wrath (1943) or Ingmar Bergman's The Virgin Spring (1959), but that resonance is quickly rescinded by Haneke's predilection for silly mystical hokum, as the film relies on a series of events that cannot be explained by the townsfolk. Dreyer's mysteries run much deeper, probing religion and morality as necessarily linked, but not necessarily correct in its mechanical dealings with human beings, creatures far more complex than rigid doctrines recognize. There's a humanism, a spiritual uncertainty that Haneke's cold and callous aesthetic makes impossible and, ultimately, sickening in its hopelessness for even the potential of goodness in human beings.
Posted by Clayton Dillard at 7:08 AM