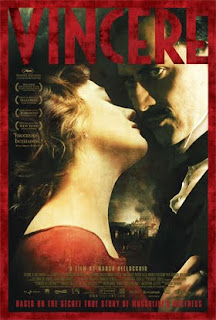 There are but a few living cinematic saints, directors who pioneered modern filmmaking in the 1960's with audacious formal experimentation (Godard), challenging philosophical narratives (Resnais), aesthetic realism (Varda), visual humanism (Olmi), and social upheaval (Bellocchio). The latter's latest film, Vincere, reminds contemporary audiences exactly what it means to be an artist - especially in the traditional sense: strict attention to mise-en-scene, reoccurring visual and aural motifs, masterful use of kinetics, socio-political commentary and present relevancy. To be succinct: Vincere comes alive on-screen, challenging the viewer to respond emotionally to its cinematic fearlessness, then intellectually to its scathing political assertions.

Far from a conventional biopic, Vincere opens by fading in on young Benito Mussolini (Fillipo Timi), who's serenity soon turns to irreverence as he makes a proposition. He claims that he wants to "challenge God" and orates his ultimatum: if God does not strike him dead in five minutes, it will be proof that God does not exist. So he stands, letting the pocket watch tick away the minutes. Bellocchio scores it not with silence or music, but the ticking of the pocket watch, almost music-box like. The juxtaposition becomes clear; though dealing with celebrity and infamous figures, he has no intention of glamorizing or pacifying. A mesmerizing high-angle shot cuts the scene in two - Mussolini stands awaiting the result of his proposition, but hard, seemingly natural light pours through nearby windows in the background. A large figure looms in the foreground too, a statue of an angel. The mise-en-scene likewise expresses Bellocchio's dilemma, attempting to portray a charismatic, monstrous figure without romanticizing. He doesn't take the easy, dehumanizing way out(consistent realism and wallowing in ugliness), but rather opts to change narrative piecings, lending his film an avant-garde quality. The scene concludes with time running out, Mussolini denouncing the existence of God, and a room full of people mobbing him for the blasphemous remarks. Music swirls, there's a cut to a young woman laughing to herself, amused by the proceedings, then a complete shift to the film's credit sequence, consisting of black and white, expressionistic architectural shots, mostly demonstrating the incomprehensible stature of modernity and metropolitan life. In a brilliant conclusion, Bellochio cuts from century old footage of young flapper-like women to his own recreation of the scene, now in color. The cut works on multiple levels, primarily announcing his film as artificial and not an authentic document of the time period. In other words, he's not attempting realism. In fact, he's refuting realism by allowing the images to to follow one another, visually communicating this impossibility. Yet the scene sets up another of the film's moral concerns: female degradation. The women model dresses, but for whom? No one's watching them, except for the other women in the room. Bourgeois expectations of beauty and sexuality converge, simultaneously probing Ida, (Giovanna Mezzogiorno) a young socialist party member and the film itself for what's expected, what the film (and Ida) must conform to in order to be accepted. Definitely artful, the first four minutes alone packs more cinematic consideration than any other film I've seen this year.

Essentially, Vincere divulges a little know fact of Mussolini's life; in 1914 Milan, before becoming an unruly fascist dictator, he had a marriage with a woman, resulting in a child. Ultimately wishing to erase these facts, Mussolini refutes the marriage, leaving Ida alone and desolate, finally in a mental ward for her seemingly absurd assertions. Yet the film, while concerned with this narrative, has much more on its mind than merely a torn-apart romance. Using sexuality early on, there are no exposition scenes to establish any docudrama conventions. Ida and Benito meet in an alley, their passion sparked by physical attraction. Later, he arrives at her door, without saying a word. Bellocchio shoots the scene in near darkness, allowing only a blue tinted light for illumination. He doesn't exploit sex, nor is he afraid to shoot it. It's elegance is a much needed wake-up call to any supposed "fan" of films who dons Toy Story 3 great filmmaking. Art, by way of dealing with human beings, necessitates a portrayal of sexuality and sexual desires. Any film that does not encompass these feelings, in some way, is by definition deficient.

In its most radical moment, Bellocchio combines archival footage, zooming text declaring war, and operatic music overlapping the fictional Mussolini standing on a balcony, dreaming of his political immortality. Shortly after, Mussolini announces his support to declare war to an uproarious room of men. Meanwhile, Ada sits in the background, relishing her relationship with the powerful figure. Mussolini's political and social lives are now at odds with one another, and it's as if the film too is conflicted by these contrasts. Bellocchio's handling of the scene announces another of the film's propositions: the danger of turning political figures into mere celebrities, whose social life and political stances aren't properly separated. The ethical consideration plays particularly relevant in a media state overrun by constant tabloid antics and political subterfuge. Likewise, the film's title (translating to "win") reflects how dehumanizing political parties become when rationality vanishes, and an "us vs. them" mentality dominates. Vitriol becomes standard practice and bipartisanship proves an impossibility. And yet Bellocchio never deviates from his visual prowess, refusing to negate kinetics through superimposition or achronology in favor of meaningless realism.

One of the film's most resonant scenes comes late, as Ida sits in an open field while Chaplin's The Kid plays, projected for all of the women confined to the mental institution. Much like in Godard's Vivre Sa Vie, where Nana watches Maria Falconetti's suffering in The Passion of Joan of Arc, the meta-act is irrefutable, but the shared spirituality hits hardest. Of course, in The Kid, Chaplin's tramp is reunited with an abandoned child, here mirroring Ida's separation from her son. If the metaphor doesn't work quite as profoundly here as in Godard's masterpiece, it's alright, since Bellocchio deliberately intends to evoke his cinematic influences. It's one of nearly a dozen instances in Vincere where people crowd in a theater or elsewhere to watch newsreels or films. Concurrent with Bellochio's insistence on dynamic imagery to accompany his thematic concerns, Vincere is as cinematically refreshing as it is dramatically compelling.
Posted by Clayton Dillard at 7:33 AM