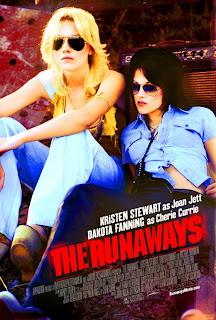 A drop of blood is the first image seen in Floria Sigismondi's The Runaways, and it's indicative of the intelligence behind the images for the entire film. The blood is not just any blood: it's the vaginal blood of Cherie Curry (Dakota Fanning), simultaneously expressing her transition into womanhood (a question the film plays out by casting 15-year-old Fanning), but also satirically signaling the arrival of the monstrous feminine, whose sexuality cannot be extracted from her artistry. The thickness and deep redness of the blood is suitable too, since later in the film Curry gets a tattoo on her shoulder of a cherry, dripping with sweetness. Clearly, the ambiguity of young sexuality comes into question, probing when sugar or the metaphorical "cherry" turns to blood, symbolizing the woman. The film nicely walks this line, consistently questioning sexual decorum in terms of youthful symbols. How early is too early to be a sex goddess? Only a few lapses into standard biopic cliches bring down Sigismonsi's fascinating exposé.

Rather than relying on wholly logical historical exposition like Ray or Walk the Line, The Runaways relies on the visuals to communicate states of fear, happiness, anxiety, and uncertainty. Young Curry and Joan Jett (Kristen Stewart) leave their neglectful families in Hollywood, CA to create one of the first all-girl rock bands. The band's manager - the hilarious and appropriately androgynous Kim Fowley (Michael Shannon) - puts their appeal in pretty basic terms: "Jail fuckin' bait!" Yet again, Sigismondi plays up her young cast's sexuality, mirroring the characters' exploitation. Here lies the film's smarts in this regard; doing blow in airplane bathrooms and making out with each other on hotel floors, the film uses sex to implicate the viewer in rock & roll tyranny, where a hedonistic pleasure at seeing young flesh may have no sexual price for the voyeur, but certainly has a moral and spiritual one, degrading not just the objectified youth physically, but violently stripping away their innocence. As Curry says at one point, "you grow up fast on the road," and its a proper understatement for Sigismondi's visual chaos. Thankfully, though, she never misplaces the humanity of her young cast and it's always about probing their sexuality, nor merely indulging it.

The Runaways also has a keen sense of what artistic creation entails. Early on, it's an act of imitation; Curry face paints to match Bowie's Space Oddity incarnation, then lipsynchs it at the school talent show. Sigismondi understands artistic influence as the literal "spark" for finding one's own talents and differences, translating to the band's first single "Cherry Bomb," a cathartic expression of youth, sex, and frustration. After influence comes exploitation, and it's the middle third that's the film's strongest, examining the impossibility of separating female sexuality from artist. That is, not that they should be separate from one another; Sigismondi is not arguing this. Rather, that they cannot co-exist on equal footing. The pussy always overrides the music. The band's inevitable break-up commences when Curry shoots a photo spread for a Japanese magazine. Jett, just having seen the photos, exclaims: "Who do you think you are? Linda fucking Lovelace! It should be about the music, not your crotch!" Likewise, Sigismondi's brilliant casting mirrors this point, as she asks whether or not young stars Fanning and Stewart can be seen apart from their sexuality - especially Fanning - whose child star career is blooming into adulthood, with more grown-up roles. Appropriately melodramatic, but lacking in a cathartic expression to match her previous proficiency, Sigismondi's only major fault is in letting this question down easy. She never gets to the crux of what causes the inevitable downfall, other than the cliched drug use and an overbearing sense of confusion. Had she addressed the spiritual and moral decline in an appropriately abstract or avant-garde manner, The Runaways could be a revelation, navigating multiple cinematic levels. While not quite on that level, it remains one of the year's best and most thoughtful films.
Posted by Clayton Dillard at 7:06 AM