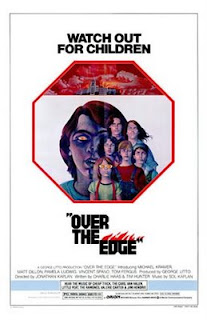 One of the genesis films in the post-punk, juvenile delinquent sub-genre that sprouted in the late 70's/early 80's, Over the Edge still stands as one of its preeminent films, addressing the ever-expanding generational gap with humor, sincerity, and hopefulness. Carl (Michael Kramer) and Richie (Matt Dillon, in his first role) serve as the vicarious avenue into teenage vandalism, drug use, and violence (most of the kids are only 14 or 15), while their parents fret and argue about what's not being done to prevent it. All of this takes place in midst of building an idyllic community (dubbed "New Grenada"), reinforcing the misplaced moral set, where monetary profit from retail value and a picturesque setting supersede realistic and compassionate expectations.

Nevertheless, Over the Edge suffers from a ho-hum script, expectedly reducing a primary police officer (Harry Northup) to a trigger-happy asshole with ego to spare. Likewise, the film curiously portrays a later-to-be-killed boy's mother in a caring, but forgiving manner during an early scene, but fails to have her reappear after his death and, thus, neglects to address her laissez-faire approach to child rearing. Finally, the film's finale is ripped straight from Carrie (1976), as the kids lock their parents inside the school, then trash and destroy the parking lot. It even ends with a swerving car, crashing and exploding. The scene's nowhere near as kinetically brilliant as De Palma's and while a school set ablaze fits perfectly into that film's tale of tortured youth cum telekinetic horror show, it plays sensationalistic here, substituting audience revenge fulfillment (guess who's in the exploding car?) for compromise. In spite of its flaws, Over the Edge approaches youthful alienation realistically and it's no wonder the film speaks to its generation (and generations since) so strongly.
Posted by Clayton Dillard at 5:47 AM