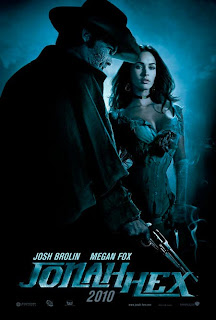 The subtlety of Nevaldine & Taylor, the irreverent action movie pair responsible for both Crank films and Gamer, lends itself well to Jonah Hex, the most criminally cast-off film of the summer. Critics and reviewers have reacted negatively to pre-release buzz of the film's hectic battle in both production and post, reportedly going through reshoots, the hiring of a new director mid film, and the studio's last minute editing efforts to stitch everything together. What's remained intact, though, is N&T's beautiful script, which on the surface is a psychedelic flick about a loner, loosely in the vein of Leone's spaghetti westerns. Allegorically, however, the film represents their own fears as artists, anxious at having, as Jonah Hex says several times, "a boss" to control them. It's bittersweet irony that, indeed, their vision has been compromised.

That's not to suggest that what's made it to the screen doesn't work on that intended level. It's an odd film, but so was Crank: High Voltage, the most brilliant and self-analytical action film of the previous decade. Like Crank, Jonah Hex couldn't care less about traditional exposition or conventional characters. Perhaps that's also part of the negative response: audiences and critics want the film to be Iron Man 2 and, thankfully, it isn't. No, director Hayward opts for a more abstract, visceral approach. He prefers (as do N&T) intellectual montage rather than continuity. Jump cuts, jump thoughts, jumbled chronology, and jokey interludes abound, replacing three acts with no acts, sacrificing tiresome overkill (see Ridley Scott's 150 minute Robin Hood) for succinct thrills (Jonah Hex runs a mere 80 minutes). The film drains the pretension out of a genre sorely needing reinvention. There's no pomposity or illusions of grandeur (a needed wake-up call to a generation that thinks The Dark Knight is one of the pinnacles of modern filmmaking) and the images come with a vibrant ferocity, utilizing a sophisticated mise-en-scene sorely absent from a modern action genre so infatuated with creating realism through verite techniques (The Bourne Supremacy, The Bourne Ultimatum, Casino Royale, District 9) that the soul is lost and nihilism takes over. Certain filmmakers love wallowing in pain and, for whatever reason, that particular aesthetic has taken over. Conventional film tastes crave such realism and continuity, then shun or belittle much more complex visual or narrative approaches not conforming with these tastes. Jonah Hex is most certainly this travesty's latest victim.

Nor can audiences accept Megan Fox's perfection as a sexual screen presence. She is boyhood wet dream, personified. Yet she's not merely an objectification, but a consistent piece in N&T's artistic pigeonhole. It's brilliant casting, placing one of Hollywood's most under appreciated actresses into a role that has no pretense about conforming to middlebrow tastes. She plays Lilah the hooker with the same coldness and uncertainty Josh Brolin uses with Hex; her line is "I don't want to be owned by no one" and it matches the pair, spiritually, rather than serendipitously. Thematically, there's profound work being done about conformity, be it social or artistic. N&T don't want to be a commodity, and their refusal to sellout or compromise should be celebrated, not chastised. There's so much at work in the film (and again, with only an 80 minute run time) that it exposes the facade of the modern blockbuster. Just as Michael Mann's latest anti -- but still raucously entertaining -- action films (Miami Vice, Public Enemies) dissect and refute commercial filmmaking practices, Jonah Hex dares you to bring the hate. But those who do may also have ignorance to spare.
Posted by Clayton Dillard at 8:03 AM