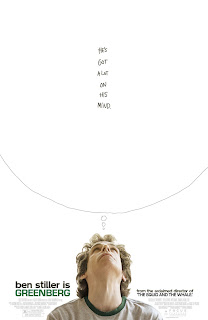 Greenberg continues the recent comedic trend of men who just can't seem to bite the bullet and finally realize...they are men. More like Wes Anderson than Judd Apatow (but with more self-attributed importance than either), Baumbach deals with intellectuals rather than over-privileged whiners (Anderson) or middlebrow comedians (Apatow). All of these films belong roughly on the same terrain (with Apatow bringing up the rear), and that's to say most of them are moderately funny, mildly perceptive, but lack the trenchant satire necessary for great comedy. Baumbach's best film remains 2005's The Squid and the Whale, tersely presenting the generational disconnect between an intellectual couple and their confused adolescent sons. Almost certainly autobiographical, that film felt painfully real, but alive and human in each of the four family members' struggle to find themselves without also losing each other. Greenberg retains some of that comedic grace, but mixes in some oddly disjointed and questionable elements as well.

The titular character, played by Ben Stiller, is a neurotic, socially dysfunctional narcissist who's moved to LA for the summer to look after his brother's mansion. But before that storyline comes Florence (Greta Gerwig), his brother's personal assistant. The film opens on Florence, in a long tracking shot that follows her while driving. The visual approach, of Florence in close-up, provides the film an immediate intimacy it later drops for Greenberg's distant pathology. The film almost makes a mistake in beginning with Florence, a sweet, nice, charming, though also damaged character, then nearly dropping her for an indulgence into Greenberg's dysfunction. Even more disheartening is the conventional, and thus, inevitable romantic connection between the two, a move that posits Florence's uncertainty about her recent break-up as equivalent to Greenberg's alienation and self-loathing. The pair never seem to match, outside of Baumbach's enacting of a neurotic fantasy, where the guy who just had a nervous breakdown can get the girl. In doing this, he devalues Florence's basic goodness by having her compromise.

The film ultimately works, despite these heavy flaws, because of the detail Baumbach brings to smaller scenes; particularly effective is Rhys Ifans as Stiller's longtime friend and their conversations have an honesty that the forced romance does not. All of the actors are good too, including Stiller, and though his character proves unlikeable due to Baumbach's romanticization of neurosis, he plays the role with enough angst and confusion to transcend the director's meddling. He's infinitely preferable here to either of those other insufferable franchises (Meet the Parents and Night the the Museum) and it's a shame he's so often relegated to studio fare, especially given his roots in more personal dramas. Baumbach might be experiencing a regression since his subsequent film following The Squid and the Whale (Margot at the Wedding) and now Greenberg have declined in effectiveness. If he'd only get out of his own way and tell a story without self-imposed contrivances, his cinema would be far richer and less frustrating.
Posted by Clayton Dillard at 10:21 AM