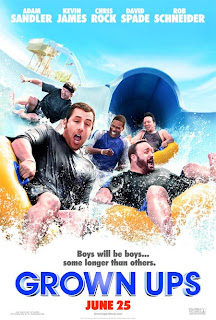 It takes a film like Grown Ups to reveal the snide, cold-hearted cynicism of film critics. All too happy to pile hatred onto a warm-hearted movie about rekindling childhood friendships, the silly crude humor and lack of conventional character drama aspirations offends the sensibilities of critics and viewers who must place themselves above the material in order to reaffirm their own self-importance. Fact is, Grown Ups is a film made for middle-class viewers, with pathos that resonate much stronger than faux-everyman comedies about middle-age like It’s Complicated, seeking to peddle a soured, materialist fantasy (Meryl Streep owns a mansion, but pouts about adding a bigger kitchen onto the house) that could not be more detached from any issues that actual human beings face. Vince Vaughn has been up to similar, unfairly dismissed work like Four Christmases and Couples Retreat, both films having genuine human compassion at their core rather than disdain. Sandler’s new effort may lack for inspired jokes or gags, but it compensates with its kind-heartedness, never devolving with mean-spirited jokes. Every character has a problem at some point and must confront his/her own inadequacies and insecurities in order to mature. Sandler’s films don’t get enough credit for their structure or style of humor, using quick, minimalist scenes or jokes to establish each individual and carrying those recurring gags throughout to allow both subversion and evolution in the joke. There’s no guilt or smugness about looks or bodies here, either. There’s sincerity about the pleasures of looking (the gang ogles Rob Schneider’s two hot daughters) and gags about his not-so-attractive daughter. The gag isn’t on the ugly chick, though, but Schneider’s awkward looks. Pleasantly, everyone meets each other with playful derision and there’s no imbalance of fun poking. Contrast this with something like The Hangover, a white male supremacist fantasy that features some of the most hate-filled, despicable characters in recent comedic memory. The jokes in Grown Ups may be tired, obvious and mostly fall-flat, but the underlying spirit is more important and, thus, it’s a likeable effort that shows the appreciable distance between more critically heralded, but less humane comedies.
Posted by Clayton Dillard at 5:33 AM No comments: 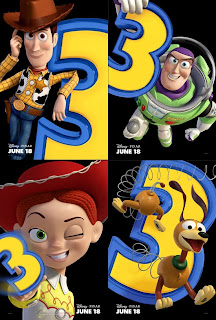 Once again, critics and moviegoers have massively overrated the latest Pixar offering, and it's now become, if it wasn't already, an annual nuisance.

Toy Story 3 can be summarized as yet another adventure/quest narrative, capped off by ten minutes of middlebrow sentimentality, incongruous and almost completely unrelated to the prior 80 minutes.

From the beginning, TS3 does nothing to make itself genuinely stand out as a true work of art and not just "for-the-masses" summer fare. The opening action sequence involving the gang and a train robbery delivers reasonably enough in the satirical thrill department, using the toys and a cleverly placed barrel of monkeys to send-up the summer blockbuster's expected quotient of rock-em, sock-em thrills. In revealing the scene as a playtime fantasy of a young Andy and not the 17-year old about to head off to college, the film misses an early opportunity to explore violent male fantasies in-transition. The scene makes no sense coming from young Andy, and it's this sort of incongruity that immediately makes a viewer aware that the filmmaker has no interest in any meaningful subtext.

After a groaningly obvious misunderstanding of circumstances (why is every film in this series triggered by accidental acts? Again, if there is a reason, there's no real exploration of that) all of the toys are sent to a day care center...for the nearly the remainder of the entire film. Since first-time director Lee Unkrich and screenwriter Michael Arndt insist on saving the sentimentality for the end, the build-up consists of yet more incongruities of both content and tone. A throwaway line like "Let's see how much we're going for on ebay" degrades any defense of the film as universal or sophisticated. It's a sitcom one-liner, through and through. Frankly, in the animation realm, it's something one would expect to hear in one of the Shrek's. That it appears in a Pixar film reveals hypocrisy on the part of the studio's rabid fans , who heap praise on the films, in part, for venturing away from pop culture references or technological fads. Mapquest, GPS and cell-phones make appearances too.

Further annoyances mount, most notably the wholly worthless inclusion of Barbie and Ken, whose every line or scene together nearly grinds any argument of "greatness" to a halt. A pop song cues their first meeting; they converse meaninglessly throughout. In a late scene, Ken puts on a fashion show, then screams as the double-crossing Barbie threatens to rip his wardrobe to shreds. There lies no intelligence in these scenes. It's Saturday morning Disney shtick, completely unrelated to any theme or, even narrative element. It's been inserted for one reason only: an easy laugh, a dumb bit meant to excite children. That's all well and good for the children, but for those claiming this as not just a good film, or a great one, but one of the best ever made? Such scenes or material do not appear in great films.

Mucking things up further is the notion that anything in the film should be felt with any sincere gravitas. These are toys, after all, and, unless I'm missing one hell of an allegory, stand for nothing relatable to human life except an obvious representation of innocence ended and a fear of change. So because the film wants to save the serious stuff for two brief bits at the end, the center is filled with such a confluence of varying material, that not much flows together in any significant way. The comradery and solidarity of the toys is nicely reinforced during a late bit as they're about to meet their fiery deaths. But again, how deeply can we feel here, seeing that these are toys...they aren't real. It's a playtime fantasy. Yet they're about to meet their death. But only 10 minutes earlier Buzz turned into an Hispanic bullfighting/womanizer stereotype, the sort of scenario you'd expect on a TBS sitcom.

What many viewers also fail to grasp is that a scenario, in and of itself, carries pathos before a scene of it is even enacted. Meaning, a mother walking into her son's room after he's packed it up and cleaned it out for college, is going to bring a tear to your eye if either a) you've ever had a mother or b) you once left home to go somewhere for a prolonged period of time. Plus, the scene's slapdash juxtaposition with the toy gang's inevitable return and survival from the day care center doesn't do it any favors in terms of emotional impact. Moreover, the film does little to make the scene particularly memorable or moving, settling for the especially syrupy and repetitive score by Randy Newman on top of long, sorrowful stares, glances and faces by the characters.

Even more shamelessly is the final scene, as Andy, finally reckoning with the fact that playtime is over, hands his toys, Woody too, over to a little girl, who hides behind her mommy's legs (so-god-damned-cute!).

When we talk great films, we're talking cinema that exists of multiple planes. Not just spectacle, not just think-piece, not just stunning visuals, not just profound thematic depth, not just breathtaking cinematography, but all of them, culled together in an air-tight package, a piece of art so vivid and alive on screen it makes one reconsider both cinema and existence simultaneously. We're talking The Third Man, L'Avventura, Viridiana, Masculine Feminine, Blue Velvet, 2001, In a Lonely Pace, Nashville, My Darline Clementine, Port of Shadows. To mention TS3, or any Pixar film anywhere even close to, or in the same realm as these films, is to disgrace all appreciation for these immortal works and hundreds more like them. To know cinematic greatness is to see these films, with human beings that struggle through the most complex ordeals and scenarios to uncover a fact of existence so enriched with wisdom and power it blows the mind and leaves your brains splattered all over the theater seats.

Suffice it to say, TS3 is pure calculated summer blockbuster, with action, adventure, drama, low-brow comedy, a little bit of sadness, and a whole lot of formula. As that, it works reasonably enough. As high art or great cinema...no fucking way.
Posted by Clayton Dillard at 6:45 PM No comments: