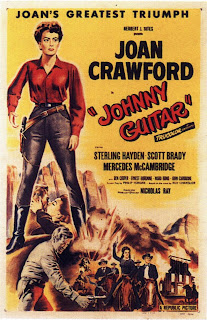 If subversion of genre expectations has been the undercurrent of Ray's previous films, Johnny Guitar makes it explicit, hybridizing the western, noir, technicolor melodrama, street film, and the woman's film into a rollicking whole, functioning simultaneously as an unbridled, cerebral entertainment and allegorical social drama about mob mentality. Transporting Fritz Lang's Fury (1936) into a western setting, but layering the set-up with backstory, past relationships and unspoken motives galore, Ray meshes what could be an ungainly mess into a significant whole.

Though Ray's film uses various generic elements, one would be remiss to call his work a pastiche. It isn't what's become known as a "mash-up," since that term refers to post-modernist headaches concerned only with genre and form, using its characters almost as an afterthought. In the presence of these differing genres are magnificently drawn characters, nearly a dozen, all fitted with actual ideological viewpoints and complex psychologies.

Upon the promise of railroad expansion, Johnny Guitar (Sterling Hayden) is summoned to a small saloon on the outskirts of town, run by Vienna (Joan Crawford), a former singer-turned-owner. Johnny carries no guns, just a guitar slung over his shoulder. Ray shoots these opening scenes with Fordian precision, revealing just enough information through the mise-en-scene to keep the narrative afloat. Guitar's distant witnessing of a stagecoach robbery signals the later arrival of the townsfolk, to investigate a murder during the robbery. Headed by the Marshall, a rancher (Ward Bond), and the dead man's high-strung sister Emma Small (Mercedes McCambride). They want Vienna out of town, because they believe she's in cahoots with the suspected murderers, headed by the Dancin' Kid (Scott Brady).

In terms of aforementioned genres, everything is present through dialogue, humor or mise-en-scene. Confronted by the mob in her own saloon, Vienna warns, standing at the top of a staircase a la Phyllis Dietrichson in Double Indemnity (1944), "all you can buy up these stairs is a bullet in the head." Johnny's maxim, that all a man needs is a cigarette and a cup of coffee echoes noir's glistening streets (Hayden would star in Kubrick's The Killing just two years later), as does his line "I'm a stranger here myself," which Ray adopted from Ogden Nash's poem as an autobiographical summarization of his place in the film industry. In later scenes of a mob hellbent on any kind of vigilante justice, the social drama of previous decades is explicitly referenced. Moreover, intimate scenes between Vienna and Johnny, revealing a previous love affair from five years earlier, engage in the kind of love melodrama deftly present in They Live by Night, In a Lonely Place and On Dangerous Ground. Here's purely Nic Ray dialogue:

JOHNNY
How many men have you forgotten?

VIENNA
As many women as you've remembered.

The incongruity reflects Jean-Luc Godard's claim that "the cinema is Nicholas Ray." Godard meant that Ray's films encompass so many different elements: theater, poetry, painting, dance, music. No wonder Godard cherished a director who so feverishly broke the rules, not afraid to go well beyond the bounds of expectation. A haunting guitar hook recurs throughout, capped by a song to end the film. This can be seen as the direct reference in Godard's Band of Outsiders (1964), where the trio of main characters get up from sipping their coffee and dance. Ray's influence stretches far and it's mainly because his best films have a seemingly unending strand of ideas and visual fascination. Johnny Guitar is certainly one of them.
Posted by Clayton Dillard at 9:49 AM