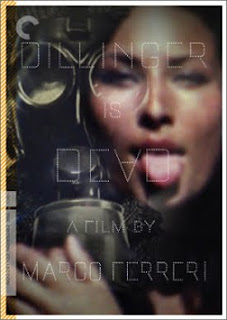 Listen carefully during the wordy opening scene of Marco Ferreri's Dillinger is Dead. Not only does it make up 75% of the dialogue for the entire film, but it serves as a rudimentary analysis of the events that follow, though the words' accuracy are left open to interpretation. What's not debatable, though, is the remarkable vigor Ferreri infuses into what is essentially a one act play, bookended by brief, exterior scenes. The film could easily stiffen or quickly become tedious. On the contrary, Ferreri uses malaise, alienation, and boredom to captivate. Comparable to some of Antonioni's best films in theme, though differing in execution, it's visual poetry with socio-political implications.

Glauco (Michel Piccoli) makes gas masks. One of his associates remarks on the metaphor of the mask, citing how man's current state resembles that of the gas chamber, having to wear a mask to survive. Remaining silent, Glauco leaves for his cluttered apartment, where magazines, food, and several women are scattered throughout. The women remain in bed, leaving Glauco to his mischievous activities. This includes cooking and listening to music, but mostly tampering with a gun, found wrapped in newspaper clippings of John Dillinger's exploits. The film's focus turns to the gun and its significance or, to be more exact, Clauco's fascination with it.

Ferreri demonstrates total control over both the material and mise-en-scene; Clauco's anomie is facilitated by never-ending sources of noise and information; the TV and stereo rarely stop playing, providing much of the film's ambiance, since Clauco appears relatively ambivalent about anything he does. He's a sort-of chipper nihilist, always with a faint smile on his face, though seemingly detached from any sense of moral or cultural purpose. His profession is an act of paradoxical self-effacement, since he seeks to preserve life, though he's certainly misanthropic. He requires constant stimulation, watching a bizarrely exhilarating home video of bullfighting while cleaning his gun. He mimics the events like a child, reacting purely through consciousness and instinct.

Clauco's detachment necessarily leads to violence. His actions throughout and the turn to dispassionate murder recall the opening words about alienation, though one gets the sense after having seen the words acted out, it may be even more complicated and deeply rooted than words can illustrate. As a tour-de-force of cinematic control and a frightening suggestion of humanity's inherent inclination towards destruction, both of others and the self, Ferreri's film is chocked full of searing imagery, complex ideas, and culturally imperative themes.

Posted by Clayton Dillard at 11:22 AM