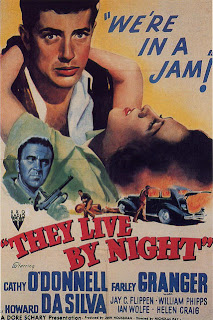 The generic effects of Nicholas Ray’s first film They Live by Night (1948), adapted from the 1937 novel Thieves Like Us, are inestimable. Ray takes a noir premise, but adds a genuine romance involving young lovers, naïve both socially and sexually. The source material certainly deserves much credit (Robert Altman would make his own adaptation in 1974, taking the title from the novel), but Ray’s film is the first cinematic example mixing sex and violence. Without it, there wouldn’t be Bonnie & Clyde (1967) or Badlands (1971). Even modern classics like Wild at Heart (1990), True Romance (1993), and Natural Born Killers (1994) are indebted. Usually, the first film to do something becomes notable more for historical reasons, while the film itself isn’t as highly regarded. That’s not the case with They Live by Night; it deserves to be in the conversation with any of its successors.

Much of the film deals with perceptions of normality, the way “most people act.” Bowie and Keechie are, by all accounts, country bumpkins; they admit it themselves, they don’t know much about love. They definitely don’t know much about sex. After getting hitched, Bowie keeps emphasizing the need to give Keechie “a real honeymoon, the way it should be done.” Their attempt to engage with so-called normality becomes the primary goal. “I don’t know much about kissing,” Keechie admits. “I reckon I don’t either,” says Bowie. She concludes: “I guess we’ll have to learn together.” The idea of togetherness becomes key.

Earlier in the film, after the robbery Bowie’s partner, Chickamaw (Howard Da Silva) tells him: “There’s one thing you gotta learn kid. You gotta look and act like other people.” In other words, don’t break the rules, lose your individuality. The union of marriage works as a paradox against Chickamaw’s philosophy; through their marriage, two become one, unifying their desires and triumphing over a society which attempts to strip it from them. Ray’s smart here, not making his young lovers complete victims of their own naïveté’s, nor lambasting the impossible circumstances they face. It is, however, the inescapability of their circumstances which provide the tragedy. Young but forever imprisoned by the inability to escape past deeds, Ray posits an inability to conform as a death warrant, as if the society can only accept its own kind, the “normal” ones.

It’s telling when Bowie and Keechie take a stroll through the park; commenting on the futility of riding horseback for pleasure or playing croquette, Bowie claims: “People sure do act funny.” The irony, of course, is that Bowie and Keechie are funny themselves, and such recreational activities are part of the norm. When they go dancing and have a fancy dinner, they dress nice, like they think they’re supposed to. Their attempt at normalcy, a good time, is eventually thwarted by a drunkard who stumbles into their table. Consistently, their attempts to fit in only make them stick out more.

Ray’s adaptation works on both narrative and thematic levels; some of his shot choices are bizarre and wonderful, especially the uber-brief, fairy tale prologue. He hones in on his characters’ humanity, their pining for a tangible end to their hard pursuits. In doing so, he makes their inevitable tragedy all the more profound. The pair’s love transcends death. In striving to fit in, the society spits them out, but what they retain, and all they could hope to hold onto, is each other. In nearly all cinematic facets, Ray’s first film is an overlooked triumph, a different, more complex breed of noir.
Posted by Clayton Dillard at 7:33 PM