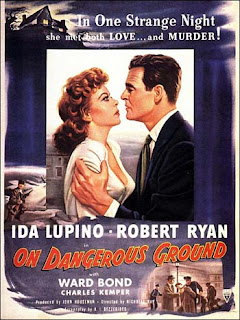 Going from the glistening streets of classic film noir to the snowy, wide-open country side, On Dangerous Ground epitomizes everything that's wonderful about Nicholas Ray's filmmaking. Nothing ever comes or plays as it should. The characters make interesting or surprising choices. Ray's shot choices dazzle and never settle for "what's expected." The tones clash, but to fascinating rather than ill-conceived effects. His films are symphonies and, as composer, he always has control of them.

The opening sets up his desire to play with the narrative. After the blaring of a fantastic Bernard Hermann score over the credits, we're introduced to three men in three separate scenes. If one's not privy to the actors, it's hard to tell exactly whose story we're getting. It eventually becomes clear that Det. Jim Wilson (Robert Ryan) is the lead, his reckless pursuit for justice colliding with any sense of morality or ethics. He can't control his rage, much like Dix Steele from In a Lonely Place. He beats men for information: "Why do you make me do it?" he asks one of them. Jim takes the job personally, and sacrifices his self for the job.

In pursuit of a killer who has off-ed a few young women, he ventures to the snowy countryside with one of the slain girl's father's (Ward Bond). After crashing their car in a chase, they happen upon the home of a young blind woman named Mary (Ida Lupino). Now the mood turns somber and heightens the melodrama. Hermann's score shifts too, from the blasting horns of noir pathos, to the understated, softly played tune of, perhaps, a "woman's film." It's becomes, as film noir scholar James Naremore says, "male melodrama." Mary softens Jim. The killer's her mentally handicapped brother, who hides in a cellar nearby. There are even intimations of incest between them, that perhaps he's taken advantage of her. These elements would begin to verge on camp were Ray not playing it with such a sincere sense of pain within his characters, each longing for happiness or, at least, a release of the shackles which metaphorically confine them. Yet again, the real narrative is the love story. It may be the least convincing of the three films reviewed so far, but nonetheless powerful. It's the oddest of Ray's early films, a hybrid of genres and themes that compassionately mesh into a congealed whole.
Posted by Clayton Dillard at 6:32 AM