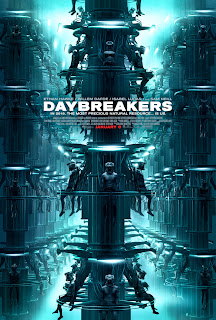 After the ungodly mess that was 2003's Undead, Michael and Peter Spierig have returned with Daybreakers, yet another unwatchable piece of horror dreck, serving as the bane of the genre's now teetering status. This putrid effort concerns an altered reality (yawn), where vampires are the dominant race (weak) and feed on the remaining humans for a dwindling blood supply (killer). Laughable attempts at reverence and homage occur throughout. Apparently, the Spierig brothers believe simply placing a fedora on the head, and plopping a cigarette in the mouth, of a detective serves as an adequate short-hand for signaling noir intentions. Or that CGI created mise-en-scene, even when evoking silent German expressionism, should inspire shock and awe. Hang-ups on visual archetypes epitomize what's wrong with genre thinking. It loses focus on meaningful elements - you know, story, characters, themes, emotional resonance. The best genre film ever made - John Carpenter's Assault on Precinct 13 (1976) resonates so forcefully because, beneath the lone, forgotten jail house, lies a much richer story about racial equality and brotherhood. I've heard some say the Spierig brothers film looks like "early John Carpenter" - anyone who would say that doesn't understand what makes several of Carpenter's early works so enduring.

Here, the duo is content to fake cinematic intelligence, but eventually get their rocks off with loads of CGI gore, silly and unbearable backstory and trashy one-liners. At one point, Elvis (Willem Dafoe) says: "Being a human in this place is about as safe as bare-backing a $5 whore." You can literally see the bitter taste of the words as they come out of Defoe's mouth. It's all played on that ridiculous, kitschy level. Truly one for the nerds.
Posted by Clayton Dillard at 5:59 AM