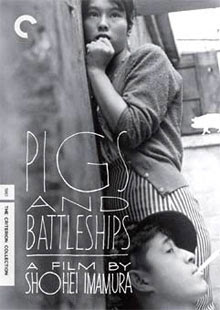 Lars Von Trier and Michael Haneke could learn a thing or two from Shohei Imamura. A misanthrope with a sense of humor and irony, the moral destitute embodied by Pigs and Battleships comes with a genuine sense of tragedy and loss. Not so much for the specific characters whose lives are ultimately wasted, but for mankind itself, that despite the potential for good and self-enrichment, it consistently opts for filth, grime and hollow circumstances. Imamura’s film is as scathing as they come.

Critical of Japanese culture (but especially the imperialist American influence) the opening credit sequence juxtaposes a patriotic American march with a Japanese pig trade, run by hoodlums who raise the pigs and sell them for major profit. The sequence captures the narrative’s absurdity – American battleships emerge as trucks run pigs through unpaved roads. A man sits in back of one of the trucks, hugging and kissing a pig. Nothing even close to this irreverent appears in Japanese cinema prior to Imamura, so his decision, and ability, to go completely over the line, yet retain both a devastated sensibility about the proceedings, rather than exploitive glee, is remarkable.

Kinta (Hiroyuki Nagato) embodies the degradation of human aspirations. A 20-something hustler, he makes money pimping women to GI’s, but has a girl of his own named Haruko (Jitsuko Yoshimura). Naturally, his hypocritical nature becomes enraged when he learns she, too, works the GI’s for money. The depraved shanty town, where there are no laws or sense of moral code, can quite easily be classified as a pigpen, a metaphor literalized late in the film. Usually, filmmakers indulge cynicism, propping themselves above their subjects and act as vicious puppeteers, cruelly pulling the strings on characters left to merely suffer on-screen. In doing so, these filmmakers abandon the characters they control, rather than utilizing their misery to state something meaningful and tragic about the human condition. Imamura strongly accomplishes the latter by respecting the plights of those involved in his narrative. There’s no condescension or pity, but a thorough implementation of a cultural zeitgeist currently gone awry.

A great example occurs in the middle of the film; the gang’s leader, thinking he has stomach cancer, wanders through the rain, thinking he has but a few days to live. It turns out his sickness is only an ulcer, treatable with “proper diet.” Like the pigpen metaphor, Imamura utilizes the illness of the boss to serve as a microcosm for the entire environment. The culture engaged with by these people is but a curable illness. Problem is, the illness can only be cured if those taken sick are responsible enough to cure it. If not, it eats away at the remaining moral fabric, until nothing remains. In the same sequence, the boss nearly escapes being hit by a train. Once the train passes, a billboard displays the message, “Nissan Life Insurance: Live Life with a Smile.” Heavy-handed, but still effective, the choice for an absurd life leads to absurd circumstances. Thus, when Kinta is pinned down in the city streets with a machine-gun and hundreds of roaming pigs, he may have just gotten what he asked for. Haruko's cathartic cry for despair following the climax is horribly bitter and riveting, capping off a truly classic denoument.
Posted by Clayton Dillard at 11:36 AM