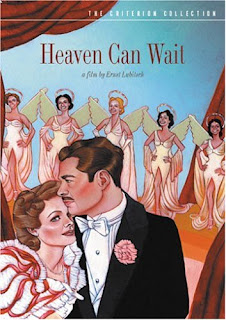 If Orson Welles had decided to give Citizen Kane a screwball element, it may have looked something like Ernst Lubitsch’s Heaven Can Wait. Lubitsch isn’t a cinematic gunslinger like Welles, and his film (his first in color) is much more conventional in terms of shots and edits. Nevertheless, what it lacks in formal play, Lubitsch compensates by providing a multifaceted emotional spectrum – sardonic, funny, cynical, heartfelt, ethereal, the comedic element doesn’t prevent the material from reaching utter bliss, through both poignancy about life’s simultaneous cruelty and wonder. Such a mixing of emotions is Lubitsch’s calling card and where his concern in previous films was strictly about the single man’s life (Trouble in Paradise, The Smiling Lieutenant, The Shop Around the Corner) he now turns to the family.

The film opens with Henry Van Cleve (Don Ameche) appearing at the gates of hell. Of course, in Lubitsch’s hell, there’s no fire and brimstone scare tactics. His Excellency (Laird Cregar) sits at a desk, the décor of his office naturally blood red and quite specious. The scant opening scene, where Henry claims “my entire life has been one big misdemeanor” serves as a frame story for Van Cleve’s life, from birth to death. Lubitsch tackles cultural ethos with ferocity. An early episode in Henry’s life has him swindled out of his favorite pair of beetles by the fast talking, but refined girl of his affection. His summarization of the incident: “From that moment on, one thing was clear to me: if you want to win a girl, you have to have lots of beetles.” Such a line connotes the “Lubitsch touch.” No matter the scene, he always ends on a witticism, or a laugh. And make no mistake, Lubitsch is the master of this tactic and it’s all the more impressive that his films attain the pathos (and more) of works that would classify themselves as “serious.”

Lubitsch distinguishes and canonicates himself through his incontrovertible view of morality. The essence of his films always boils down to such issues and his lack of confliction becomes absolutely persuasive through his applications. For instance, a cheeky sequence where young Henry has had a glass of wine playfully deconstructs bourgeois decorum (“keep a stiff upper lip”) and the purposed European decadence which Lubitsch, himself, has been accused of infusing into American film culture. Certainly, Lubitsch’s view on sex lacks the repression of his early-1930’s contemporaries (one need only to see his masterpiece The Smiling Lieutenant to know this). However, the implementation of the production code in the mid 1930’s makes his post-code films more restricted, yet subtler in their liberties.

Eventually, Henry marries Martha (Gene Tierney) and their marriage, like most, suffers many ups and downs. However, Henry’s ultimate love for Martha, most pointed in old age, relies not on sex but mutual respect. A scene late in the film, where they dance together for the last time, features a wonderful crane shot, slowly pulling away and up from the dancing couple. Their mortality is maximized by their rapidly decreasing stature in comparison to the enormous ballroom, a riveting scene tinged with lament for an ephemeral lifespan, yet filled with appreciation for the chance to live it and the hope that one day, they may meet again.

Posted by Clayton Dillard at 6:12 AM