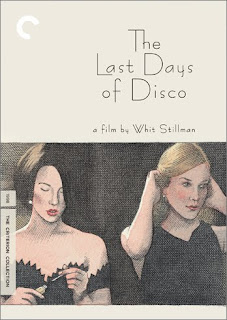 The Last Days of Disco – Whit Stillman’s third feature film – is, at its core, much the same as his first. It aims to offer a vantage point from inside a culture meant for a select few. Instead of bourgeois, debutante society, now it’s an early 80’s disco scene, and its ambiance and decorum are dissected by college graduates Alice (Chloe Sevigny) and Charlotte (Kate Beckinsale). Much like Metropolitan, the rigid mores and established laws of the scene serve for much of the satire and witticisms. In no way is Stillman sentimentalizing the era gone by, but neither is he contemptible. Wielding compassion, irony and a fluent comprehension of his material, Stillman demonstrates the ultimate instance of cultural transience, and how evolving social structure remains relatively unsophisticated, no matter how much glam, glitter or makeup one applies.

From a purely narrative standpoint, Stillman’s third feature is both more ambitious and successful. The elitist nightclub becomes a social sanctuary, meant only for a select few. From the opening scene, Alice and Charlotte explain its confidentiality: “I heard you have a better chance of getting in if you come by a cab.” It continues Stillman’s fixation on unwritten rules or how ways of behavior become solidified, though unspoken, within a given culture. Likewise, young lawyer Josh (Matt Keeslar) explains the problem with disco’s ascension: “What I found terribly encouraging was the idea that when the time in life came to have a social life, there’d be all these great places for people to go to because, as you’ll remember, for many years, there were none. What I didn’t realize, was that they’d get so impossible to get into.” Great lines like this abound in Stillman’s script – he has an astute ear for both perceptive dialogue and ways of speaking.

The film benefits immensely from a layered opening scene, weaving all of the key players in and out of the club. At the crux of it all is the magnificent Sevigny, who turns Alice into one of the most richly drawn female characters in the past fifteen years of American cinema. Alice’s perception about the culture and ability to detach herself from it, is made poignant by her vulnerable sexuality. In one of the film’s most intimate dialogue exchanges, Alice wonders whether or not she’s still a virgin – that is, whether or not her previous sexual encounters could be deemed intercourse. Her line of thought demonstrates how the cultural zeitgeist becomes extrapolated onto all related, and even exterior thought processes. The habitual need to label oneself (a preppie, yuppie, disco fan, etc.) degrades humanity and creates stereotypes. Stillman’s greater point is that ethics, mores and morality remain contingent within the given society – at least, in the eyes of the society itself.

Posted by Clayton Dillard at 5:45 PM