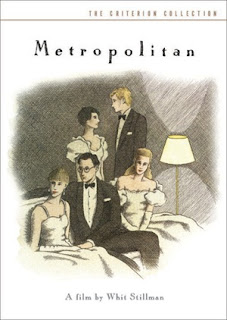 Unlike his dry-humored indie contemporaries (Wes Anderson and Noah Baumbach, particularly), Whit Stillman has never received anywhere close to what could be called widespread recognition. The majority of this may be due to the fact that Stillman has only made three films, the last being The Last Days of Disco (1998), but the remaining lack thereof can be attributed to what his films are about. Metropolitan, Stillman’s first film, would seem to be of the most esoteric sort. During Christmas break in Manhattan, seven college bourgeoisies (and a newly accepted proletarian) congregate at after parties, jawing over topics including Fourierism, Jane Austen, Bunuel, Surrealism and the literary criticism of Lionel Trilling. Thankfully, Stillman writes and views his characters with simultaneous affection and tongue-in-cheek disdain.

Take Tom Townsend (Edward Clements), from the west side of Manhattan and the outsider being welcomed into the Sally Fowler Rat Pack (the self-bestowed name of the debutantes). Discussing Mansfield Park with Audrey Rouget (Carolyn Farina), Townsend admits that he hasn’t read the novel, and generally refrains from doing so, because “I can never forget than none of it really happened and it’s all just made up by the author.” Notice Stillman’s immediate cut to black after this admission. It’s one of many instances where a curious, bordering on absurd admission is delivered with utmost certainty by his assured and confident characters. The cut is what demonstrates Whitman's stance on the material. It's not condescending, nor is it puerile self-loathing. It's affectionate teasing. Certainly, the film is something of an autobiographical piece and Stillman manages to strike a nice balance between the two inclinations. The smarmy intellectualism of the characters reveals itself as hollow and meaningless, since their inability to understand emotion and love has not yet developed. Conformity to the class, to the decorum of high society, renders these young adults still children.

However, here lies the larger point and insight of Stillman’s film. One gets the suspicion that these characters (and all people) never truly grow up. This also draws out its universal element. The comedy of manners approach, like the best of its literary forbearers, demonstrates the humanity beneath the facade. Under the tuxedos, white gloves and gowns, lie novices trying to find their way through the world. By not indulging both himself and the characters, Whitman’s farce becomes more and more tinged with comedic genius. He finds humanity where cynicism runs rampant.

Posted by Clayton Dillard at 5:59 AM