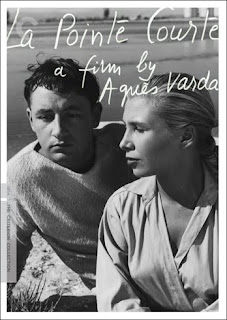 Agnes Varda’s La Pointe Courte, like most first films, values the shot over the narrative. One can ascertain this from the very first scene, as Varda’s opening credits continue into the opening shot. Tracking down the desolate alley of a windy Parisian village, she cuts to focus on a well-dressed man, leaning against a tree. The shot continues, coming parallel to show an approaching man, a fisherman. They exchange a quick hello – then Varda tracks back from where she came, now following the fisherman. Boldly, the next cut begins tracking through a doorway, viewing a lower class woman feeding more than half a dozen children; the next room, a small child lying awake in her crib. A wipe, then out the back door, tracking over piles of wood and debris. Following this fascinating use of movement, Varda settles into a more traditional continuity editing style, yet her images remain as profoundly dynamic.

Her brief film (running only 80 minutes) primarily chronicles the strained relationship of a wandering married couple, yet also concerns the members of the small town, their daily routines and the elegance of their rustic lifestyles. The film is, above all, an exercise in formalism. Naturally, the setting remains integral to that style, but her film suffers from too much rigid symbolism in her compositions. Varda admits herself, “I wrote a very detailed shooting script, for good or bad, and that’s exactly what I shot.” Such rigidity makes for a cold viewing experience. It pales compared to the warmth of her masterpiece Cleo from 5 to 7 (1962). In that film, the material interests and idiosyncrasies of a beautiful singer were examined and made significant by showing only a 90 minute period in her life. Like its New Wave contemporaries, the combination of realism and artifice spawned a new hybrid which simultaneously rejects traditional Hollywood filmmaking style, but embraces its pathos, its visceral form.

In La Pointe Courte, Varda loses those pathos by making her characters specters, meant only to reveal her novice predilection for visual beauty. Luckily for her, she’s as gifted as any at doing such. But the dialogue is detached, rote. Sitting on a stack of wood, the woman says “If we separate, nothing else will interest me.” Naturally, the detachment comes through her blank stare, not embracing her lover. He replies: “You had ambitions for ‘our love.’ It’s your pride talking, not your grief.” The rhetorical method here, in personifying abstract emotions, parallels the cluttered frame’s obtuseness. It’s film for film’s sake – and thus, rings pretentious. Varda never finds anything honest or human on which she can apply her astounding cinematic gifts, though it’s not as disappointing knowing the leaps she would make in films to come.

Posted by Clayton Dillard at 8:08 AM