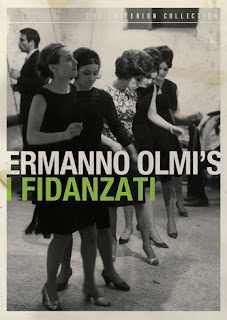 It’s a film like Ermanno Olmi’s I Fidanzati that makes the endeavors of The Criterion Collection so invaluable to cinephiles. Based off of this film and Il Posto (Olmi’s other film in the collection), he is one of the majors, fit to stand by the likes of Alain Resnais, Marcel Carne and Yasujiro Ozu as a master of juxtaposing image and theme, for an utterly poetic effect. Not quite neo-realist, not quite poetic realism, Olmi's film becomes nearly impossible to categorize.

The premise is simple: a couple (the film’s title literally translates as “the fiancés”) experiences both doubt and sadness at being separated from one another, when Giovanni (Carlo Cabrini) accepts a new job in Sicily, leaving Liliana (Anna Canzi) in Milan. Essentially, this remains the entirety of the narrative. What becomes so memorable, however, is the way Olmi tells it. The opening scene – about 13 minutes long – can be seen as a direct homage to Resnais’ Hiroshima Mon Amour (1959), in which two lovers recall both history and love to explain the origin of their relationship. Here, the practically dialogue free sequence throws time in a blender, jumping frontwards, backwards and sideways, piecing together mesmerizing cinematic compositions to simultaneously explain the bare-bones scenario and dazzle the eye.

Olmi is getting at something much larger about the human experience, explained through sequences of Giovanni conversing with a depressed waiter, playing gags on his co-workers during the wee hours of the morning, wandering the streets of Sicily and cramming into his small hotel room. The small “bits of business”, if you will, are what makes the film so profound. The opening sequence – a dance – continually interweaves with present goings-on. The physicality of the dance represents both sexual promiscuity and symbolizes the economic turn Giovanni has so long desired. He says at one point: “If I don’t take this job, there are ten other men waiting to accept.” Thus, all of these elements thrust into motion his desire to fulfill what his society deems logical for the ambitious worker. Nevertheless, the relationship becomes more emotionally complex when Liliana divulges her true feelings. In an astounding climax, time seems to erase and the couple’s reverie, their idealization of how they will turn out, seems to transcend rationality. It’s but a dream of what their relationship may become, if only they can strengthen it and endure such separation. By overlapping time and supplying such beautiful imagery, Olmi’s written a love letter to both cinema and sweethearts.

Posted by Clayton Dillard at 1:52 PM