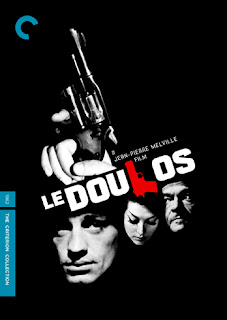 Jean-Pierre Melville’s Le Doulos is, by all accounts, one of his lesser films. Not necessarily in quality – the film’s opening and closing sequences are both marvels of expressionist and fatalistic filmmaking. Yet, his foray into Franco-American gangster film remains much more notable for his 1967 masterpiece Le Samourai. That film stands alone, rivaled only, perhaps, by John Woo’s 1989 homage The Killer. Watching Le Doulos, one gets the feeling it’s merely a warm up for his later masterpiece. However, to write-off Le Doulos as just a transitory thriller in Melville’s oeuvre would be downright inane. Certainly, given both its playful and serious nature, it is without question a work of art. Problem is, the human element gets muddled along the way. After the film’s virtuoso opening, involving a man, returning to kill a man he believes was responsible for sending him to jail, only the noir coda seems to be in motion. That is, Melville is so obsessed with American film noir that its style overrules the human element. By the film’s conclusion, when the tragedy should be in full swing, it all rings somewhat deflated.

What Melville does well, he does exceedingly so. The title card which opens the film, explains the derivation of the title. Doulos, in street lingo, means “hat.” However, in secret gangs and in the police force, it also means “one who wears the hat” or “a police informer.” Equally circular is the existential maxim following: “A person must choose whether they want to die or to lie.” An extensive tracking shot follows: Faugel (Serge Reggiani) walks under a bridge, his hat and trench coat emblematic of the prototypical noir figure. However, given the title, one must consistently ask: Is this man the informer? The film has fun, visually and thematically, playing with that question. Faugel has returned for revenge – to payback those who sent him to jail six years ago. Naturally, two-facing and double-crossing abound.

With the exception of the film’s opening and closing sequences, there’s not too much in Le Doulos to distinguish it from numerous other noirs. Sure, Melville’s sensibilities for visual style are much more prolific than the run-of-the-mill productions, but the text of his film never comes alive or seems more than just an excuse to do some cool noir shit, like have Faugel, not just look into a mirror, but a broken mirror, even further expressing his conflicted, duplicitous state. Or his play with mise-en-scene, beautifully shrouding characters in both light and darkness. It comes off often as a stellar imitation, but an imitation nonetheless, of a classic noir like Out of the Past (1947). Nor does it have the visceral punch of a film like Jules Dassin’s Rififi (1955). And again, Melville himself makes the definitive Franco gangster noir five years later. Certainly, Melville’s film isn’t without its lively moments and fascinating formal play, but there’s not a narrative here that’s quite worthy of his visual talents.

Posted by Clayton Dillard at 1:40 PM