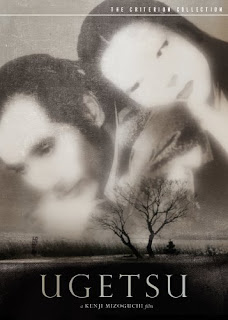 A film like Kenji Mizoguchi’s Ugetsu works so well, because it aims so small. Utilizing the well known stories of Japanese writer Akinari Ueda, the foundation of Mizoguchi’s thematic concern remains relatively basic – the human price for war and greed. These are not exclusively small topics by any means, yet the simplicity of the storytelling allows for such subtle, powerful allegory. As Tony Rayns points out on the commentary track, Mizoguchi uses 16th century Japan, and the moral turmoil of that time, to reflect and parallel mid-1950’s Japan. Mizoguchi’s popularity among critics and other filmmakers alike (Godard called him “the greatest of Japanese filmmakers, or quite simply one of the greatest of filmmakers”) makes embarking on Ugetsu, often thought to be his masterpiece, a daunting task. Nevertheless, it’s a wholly accessible film, given its parable-like narrative. Its beauty – and it’s quite beautiful – comes largely from the heartbreak suffered by its four lead characters. It’s also a kaidan and the supernatural element literally makes for a transcendental story about the facade of material wealth.

Set in 16th century Japan during civil war, Genjuro (Masayuki Mori) and his brother Tobei (Eitaro Ozawa) make fine, hand-made pottery to sell in the city. Tobei is a bit of an idiot, always having dreamed of becoming a Samurai. As the film opens, he leaves with Genjuro – Tobei to pursue his dream and Genjuro to make the little money he can. Masterful cross-cutting eventually puts them both together, back home with their wives and child. The money goes to Genjuro’s head; he wants more and fast, because soldiers are expected to invade shortly. Mizoguchi establishes all of this in a mere 15 minutes. Economical, but not truncated, he breaks the story down to its essentials and his compositions do the rest. Eventually, Genjuro and Tobei are confronted with choices, all of them concerning both their status as men and desires for decadence.

Mizoguchi, like many of his Japanese brethren, had one of the sharpest eyes for composition. Nothing in his frame is ever a mistake. He utilizes cuts selectively, often only for emphasis or on movement. The unbroken shot (a lost art in contemporary cinema) lends the material both fluidity and, ironically, a mystical sensibility. Mystical, because the movement of the camera transports the viewer when the viewer is not actually moving. It feels adventurous, elegant and dangerous all at once. Mizoguchi, however, doesn’t overdue it; never are his stylistic choices meant to distract from the tragedy at hand. Ugetsu could hardly be described as neo-realist, yet the minimalist, heartbreaking narrative shares much in common with Vittorio De Sica’s Bicycle Thieves (1948). In that film, the central character was thrust into circumstances beyond his control. In Ugetsu, Genjuro holds his fate, and that of his loved ones, in his own hands. He has the opportunity to evaluate his choice. That he fumbles it makes his story, perhaps, even more devastating.

Posted by Clayton Dillard at 3:20 PM