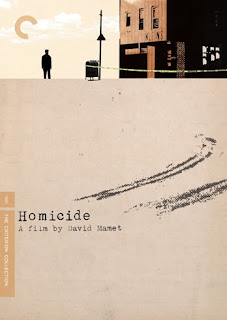 The beginning of David Mamet’s Homicide appears as if it’s going to follow in the same turgid footsteps of House of Games. Following a SWAT team raid on an apartment in the ghetto, Bob Gold (Joe Mantegna) and Tim Sullivan (William H. Macy) gab about an escaped murderer (Ving Rhames). Amidst their grimace inducing back-and-forths, racial epithets get hurled. Gold, a Jew who feels he’s lost touch with his heritage, soon gets pulled from the initial case, to investigate the slaying of elderly Jewish woman who owned a convenience store. Through this pursuit, Gold seeks answers, both personal and professional.

The first 20 minutes do not match the rest of Mamet’s exploration of cultural uncertainty. Playing like a mix between a poorly written episode of Law and Order, meshed with the creaky racial polemics of Paul Haggis, it’s unpleasant and risible to no end. Mamet’s inability to help himself, and indulge in peppy, but languid dialogue leaves the proceedings slack-jawed in poor taste. However, once the crux Gold’s confliction becomes present, the bitter taste lessens and approaches revelation. Nevertheless, one must first suffer through a barrage of portentous assertions. The best example ends the sequence following the Jewish woman’s murder. Her granddaughter and son appear on the scene. Entering the grocery, and seeing the dead body, he states “It never ends.” “What never ends,” inquires Gold. She replies solemnly, “The Jews, I guess.” Then, Mamet slowly fades to black, as if the line, in all of its ill-mannered intent, should provide a riveting jolt.

Luckily, the last 2/3rds of the film settles in, abandoning the nonsense and delving into Gold’s personal demons. Gold, torn between his ethical duties to the police force and heritage as a Jew serves for an unsettling mix of inner-city turmoil and cultural displacement, the loss of a concrete identity. Where House of Games merely and inconsequentially used noir archetypes to utterly empty results, Homicide manages both genre competence and moral confliction. Meeting with a Rabbi in search of answers in his case, Gold admits to not being able to read Hebrew. He replies, coldly: “You say you’re a Jew, but you can’t read Hebrew. What are you then?” Though fraught with tactical existentialism, it becomes the central thematic concern. Mamet refrains from overindulging in Gold’s sense of self-loathing. His decision, whether to honor societal or cultural duty over the other is universal and the conclusion achieves an impressive level of restraint for a filmmaker who had previously demonstrated little.

Posted by Clayton Dillard at 6:16 PM