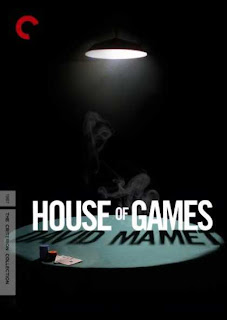 Too often, sub-par genre films get mistaken as profound works of art. Usually, especially as related to thrillers or heist films, words like "taut," "merciless" or "psychologically acute" are tossed around as superlatives, when they actually reveal the hollowed void such films inhabit. Chalk up David Mamet's House of Games under this category. Displacing genuine noir ethos for an indulgent con job, every aspect of his calculated effort lacks resonance.

Mamet is damned from the get-go, once the writer-director's predilections for a goofy narrative about psychological duress becomes clear. Psychiatrist Margaret Ford (Lindsay Crouse)can't help her patients. She's the author of a book called "Driven: Obsession and Compulsion in Everyday Life." People ask her to autograph it when she's walking across the park. Well twice actually, each one bookending her encounter with a sharp-witted hustler named Mike Mancuso (Joe Mantegna). Trying to help a patient who owes Mike a gambling debt, she's lured into, and fascinated by, the life of a crook. Walking down the street after nearly hustling an earnest soldier (William H. Macy), Mike imparts the expected cynicism:

What we've just seen is the operation of a slightly different
philosophical principle.

For filmmakers like Mamet, lines like that are all that noir is about. Dropping cultural paranoia and resonant hierarchical uncertainty, he retains the dialogue cadence, chiaroscuro and criss-crossing. In doing so, he’s paved the way for more than two decades of duplication. Guys like Steven Soderbergh, John Dahl, David Fincher and Paul Thomas Anderson have followed suit.

Even more insulting for Mamet, is that his narrative doesn’t function on the basic level it desires. Presumably, plot twists are implemented to keep a viewer on their toes. Such practices are lowbrow to begin with, but this is the game Mamet likes. Stunningly, the true intentions of characters can be gleaned and are telegraphed 30-45 minutes before such revelations take place. Don’t try to explain their transparency as planned by Mamet, either; trying to assert the character’s true intentions as a function of Mamet’s commentary on heist films would not only give Mamet far too much credit, but neglect the fundamental problem with his film. It doesn’t amount to anything more than fashionable ambivalence (the easiest of dénouement choices) and an exercise in genre ego stroking. Take my advice: don’t trust nobody, especially David Mamet.

Posted by Clayton Dillard at 12:34 PM