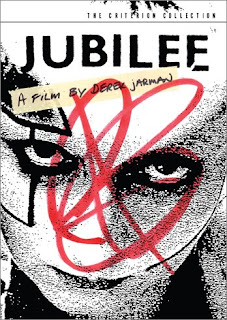 The hammered-down subversion of Derek Jarman’s Jubilee announces itself during the opening credits, as the soft, gentle sounds of a seaside afternoon leads into a film that’s anything but. In doing so, Jarman lays down his j-u-x-t-a-p-o-s-i-t-i-o-n and delves headway into a post-apocalyptic world of punk rejects, akin to that of Alex and his drooges from A Clockwork Orange (1971). The youth run the show – among them a chubby, orange haired, machine-gun toting freak named Mad (Toyah Wilcox), the roving gang’s heroine, Amyl Nitrate (Jordan) and a slew of punk originals, including Adam Ant.

It's a tired vogue of young filmmakers who want to make films about the end of the world. It's easy cynicism and Jarman does little to refute the trend. The great, forgotten American filmmaker Paul Morrissey used outlandish subjects, drug addiction and kinky sexual interludes to satirize and criticize the dark, ugly side of sexual liberation. For Morrissey, free love degraded human compassion and wreaked havoc on traditional values, which held both society and the family together (his masterpiece Blood for Dracula (1974) is the best example). With Jubilee, Jarman attempts something similar, taking the angry, radical punk movement and transporting its ideology to a place devoid of humanity, where anarchists roam and the remaining police force beat and shoot without warning. Problem is, Jarman fails to locate the humanity in his subjects. They are pieces of ass, degraded sickies, sexual deviants. A typical cringe inducing line goes like this: having sex on and under bright red, plastic sheets, the satisfied female retorts at two watching gang members: “Leave him alone! He’s better than a vibrator and bigger!”

The images Jarman creates are undeniably powerful, memorable. His bleak vision of London oozes miasma, but what’s the source of the destruction? An absurd frame narrative begins with Queen Elizabeth I, going into the future to witness first hand the turmoil. Nothing much comes of this thread, so its inclusion presumably is meant as a denunciation of the English monarchy. Thus, it has the expected radical underpinnings. However, Jarman also seems to disapprove of outright hostility towards such establishment, by making his characters such loons. Nevertheless, he ultimately seems to side with them, following some beatings at the hands of a police force. So here again, what is the moral stance of the film? It lacks one, which makes the entire proceedings both hard to endure and relatively indulgent. There are some sharp bits, like when a woman asks a young punk sitting in a coffee shop, “What do you do?” He replies unsuspectingly, “Nothing. I’m a musician.” There are other comparably intelligent lines and sequences throughout, but the end product is much like the world it depicts – ugly, brutal, unpalatable and without much sense or purpose.

Posted by Clayton Dillard at 9:28 AM