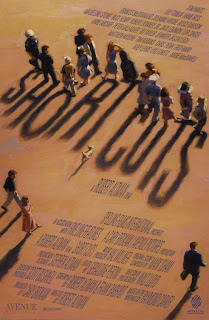 Every film Robert Altman ever made, in some way, represents a particular facet of American culture, done only the way Altman was capable of doing. Valuing humanism over cynicism, the very essence of an Altman film is utter liberation. He manages to enunciate his worldview with feral precision; it may seem like an oxymoron at first, but upon inspection, his grandest film (Nashville) remains unparalleled in that regard. He interweaves some three dozen characters into a single film, yet never wastes a sequence, a scene or even a moment. Everything has a purpose in expressing his masterfully conceived view of American culture. Thus, the release of Short Cuts in 1993 – even longer, a more complex narrative structure, perhaps bleaker – signals the utmost ambition of a man who’d already set the bar. It may not be quite as powerful as the unified whole that is Nashville, but it’s incredible to behold and never relinquishes its anti-melodramatic grasp.

Short Cuts is indeed an anti-melodrama. Altman never indulges or exploits the emotional pain of his characters, nor does his script, adapted from the short stories of Raymond Carver, attempt to sum up the film’s intent. Perhaps this is why his films are often described as “ponderous,” “messy” or “lacking cohesion.” Obviously, lesser taste opts for the phony histrionics of Paul Haggis’ “Crash,” where characters converse with the subtlety of a bowling ball. Altman’s film is simply “there;” he is the king of non-judgmental filmmaking. His cast of characters here include: an adulterous police officer, his flabbergasted wife, a jealous doctor, his artist wife, a stay-at-home mom who moonlights as a phone sex operator, a troubled, mid-20’s cellist and a pissed-off baker. The tone, however, never wavers or falters. The characters, no matter the circumstances, seem to make their own decisions. Yet, Altman isn’t aiming for any sort of hokey “real-life” drama. He’s reaching something much more profound and not concerned with such meaningless aesthetic formalism. His film ever so strongly hits a nerve concerning what it means to be an adult, thrust into modern American society. Sexual jealousy, ethical quandaries, human desires – every vignette thoroughly examines such troubling questions. Whether it is a car accident, a drunken front-seat fuck or discovering a corpse in a river, every action and reaction is peppered with such moral employment. Characters live or die based on their choices. Most live and it’s the day to day human experience Altman captures so masterfully. No false twists, no neat tie-ups, the film is a symphony of messiness. It’s true to life, but more than that, it’s dazzling cinema.


Posted by Clayton Dillard at 6:36 PM