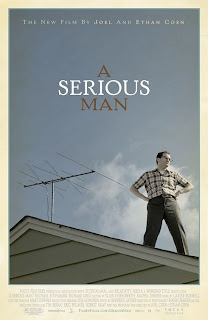 The Coen brothers’ latest may be their most opaque, autobiographical and bleak to date. It concerns a 1967 Minnesotan Physics professor Larry Gopnick (Michael Stuhlbarg) whose life begins to crumble around him following a blackmail scheme from a student, his wife leaving him for an older friend and his brother’s run-ins with police. The small narrative fields enormous questions, primarily the absurdity of life. They insert small parables (including a fascinating prologue) to illustrate the madness Larry cannot comprehend. As usual, the overwhelming “seriousness’ of the material is treated with the bros deft eye for black comedy. Clearly, they understand the humor in the absurdity, which is, more or less, what they’re entire filmmaking careers have been founded upon. But A Serious Man has a certain degree of poignancy as well. The closing image of the film only literalizes what has proceeded. If the film, as a whole, doesn’t feel nearly as powerful as the individual sequences, it’s but a minor quibble for a film so richly philosophical and damned entertaining.