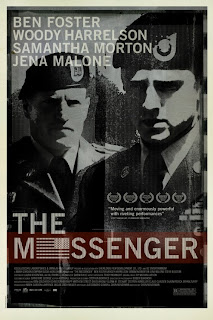 The Messenger is the rare indie drama that truly works. Most of this has to go to first time director Oren Moverman, whose script, if lacking in thematic originality, is enriched with narrative invention. Due must also go to the excellent casting and performances, which collectively rank at the top of the year’s list. Staff Sergeant Will Montgomery (Ben Foster), injured while on tour in Iraq, is assigned to a death notification team, with seasoned veteran Captain Tony Stone (Woody Harrelson). Essentially, they inform a fallen soldier’s next of kin of that death, experiencing the most primal and inexplicable emotions of those family members. The material would be ripe for exploitation, if Moverman’s handling of it weren’t so carefully moderated and if Foster and Harrelson didn’t hit just the right notes. One particular assignment holds interest for Will; he becomes interested in Olivia (Samantha Morton) whose husband was killed in Iraq. Moverman isn’t interested whatsoever in the sexual relationship, but in two people both broken down by war, needing another person to confide in, comfort them. Nor does the film delve into easy anti-war polemics; it remains concerned with the psychological ramifications these characters must confront in continuing their lives. Even the monologues afforded each character don’t ring false, but rather an honest expulsion of genuine feeling and anguish. Nothing about the subject matter is easy and it’s a relief Moverman doesn’t feel the need to exploit that unease; on the contrary, his honest evocation makes for tough, forthright, riveting human drama.