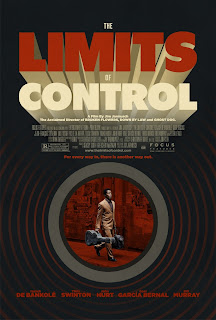 Locating his Jean-Pierre Melville side, Jarmusch's latest works best as an interesting failure. Isaach De Bankole occupies his specter, a silent assassin traveling through Spain on different assignments. Essentially a Kafkaesque tale with its inescapable circularity, the pretension in the disjointed philosophy isn't so much the problem as is the creaky explication via inserted characters. Most annoying is a blond Tilda Swinton who babbles about cinema preferences and "The Lady from Shanghai" or that each encounter has the same two or three bits of wisdom to impart. Jarmusch also can't help but pound out his meta-cinema intentions, having De Bankole constantly staring at works of art, then reversing the look, implying many layers of art and reality. Nevertheless, the structural experimentation never bores and small bits of business (De Bankole must have two individual espressos rather than a double) lend it a quiet fascination. It's total disinterest in narrative tension or impending action sequences doesn't particularly make it any more watchable, though the complete restraint of Jarmusch in this regard is impressive.