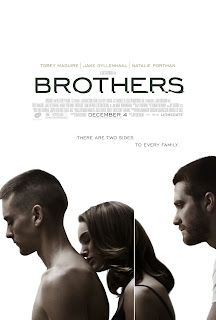 Jim Sheridan, given the entirety of his films, is obsessed with nationality, which in turn, becomes patriotism. Many wondered why he did 50 Cent’s Get Rich or Die Tryin’, but it’s concurrent with his interests, given the potent narrative about black identity. He’s at it once again in Brothers, a remake of the superb 2004 Danish film. The narrative now concerns a young American family, bereaved by the loss of Cpt. Sam Cahill (Tobey Maguire). His wife Grace (Natalie Portman) is left to raise their two daughters, with the help of deadbeat, ex-con Tommy (Jake Gyllenhaal), who still likes to get drunk on a nightly basis. A relationship forms between them, but when Sam is found alive and returns home, it gets a bit complicated. The melodrama in Sam’s return is grounded by the authenticity of Sheridan’s intent and the humanity of the performances. Sheridan isn’t exploiting the war in Afghanistan for sentimentality, but a sincere view of a family afflicted by such pain. Nevertheless, he doesn’t aim for the gritty realism that plagues so much indie cinema; it feels like a major motion picture and this goes a long way in allowing the unlikely scenario to hold credence. The drama comes from the small bits around a dinner table or an intense man-to-man between Sam and Tommy, who’s being grilled about his potential sexual transgression. The sex, though, is only the fuel for Sam’s disillusionment, a man forced to confront mortality through an act of violence which he cannot forget. The film examines war with vigor and insight; it thankfully forgoes the rabble-rousing slap-in-the-face politics of In the Valley of Elah for a film about family, patriotism and the human cost of war.