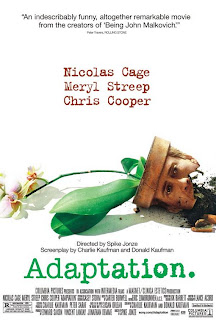 Nevermind Rob Marshall's upcoming Nine. Spike Jonze's Adaptation is the 8 1/2 of the decade, simultaneously encompassing art, life and evolution in the most delirious of packages. Here's a film that makes self-loathing cool again -- Charlie Kaufman, lampooning his own neurosis makes for hilarious, but profound filmmaking as played by Nic Cage, who has seldom been better; his back and forths with his brother (himself) demonstrate an actor, known for his unrestrained madness, exhibiting utter calm and certainty. It wouldn't be too hyperbolic to call this his best work. Adaptation signals the type of eccentric, intelligent filmmaking often shyed away from. It's messy, esoteric and one big in-joke for the Hollywood process, but its characters (Chris Cooper and Meryl Streep specifically) signal something much larger about life's persistent uncertainty: doubt, regret, pain and loss. The comedy hinges on how much you find Hollywood self-satirization funny, but the gravitas remain universal.

A
Posted by Clayton Dillard at 5:07 PM