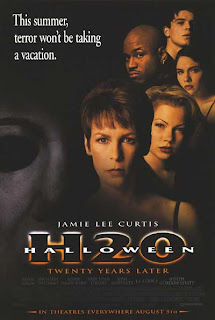 It's a shame to end a horror movie fest with a mediocre movie, but that's exactly what I've done. The sad thing is, though, that Halloween: H20 remains the best modern reincarnation of Michael Myers; this is by no means impressive, when the competition is as rigorous as a Busta Rhymes sequel and a couple of Rob Zombie migraines. Perhaps I'm selling H20 short; it's a decent little film, clearly meant to hit each and every narrative beat that the first two Scream films did, and it's nice to see that Laurie Strode (Jamie Lee Curtis), twenty years later, still can't sleep at night.

The script here, isn't bad. One wishes the studio had gotten a bit more of a stylistic director than the "eh" Steve Miner to helm Michael's comeback. Some more interesting choices could have been made visually, but as is, the rather standard mise-en-scene is functional. The slow burn works pretty well too, giving each character a chance to form a little development before being knocked off. This includes the debut role of Josh Hartnett as Strode's son, Michelle Williams as his girlfriend and LL Cool J as an aspiring writer of erotic novels, who currently works as a security guard to pay the bills. There's some ok stuff between them, but all of this is just filler until the last 15 minutes, in which Strode and Myers face off. It's executed well, in the desolate halls of an evacuated private school. Yet even this is just a build up to the final scene, where an axe-wielding Curtis finally puts Myers to rest. Or not, as sequels have shown. "You can't kill the Boogeyman," is a line from the original Halloween and hopefully that rings true for the horror film as well. It's been a fun 31 days. Thanks to all those who've read and responded. I look forward to part two, about 11 months from now.

Posted by Clayton Dillard at 5:08 AM