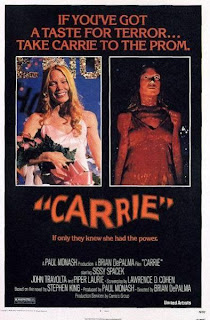 Brian De Palma, as well regarded as he is, remains one of the most underrated American directors in the last half of the 20th century. De Palma had a philosophy about how to survive in Hollywood: "Make one for me, then make one for them." Carrie was one for them, but like all great directors, the project quickly turned into one for "me." It's, arguably, the greatest film De Palma made in the 1970's, and surely one of the seminal horror classics of that era. The most impressive thing about the film, though, is how much of its value comes purely from De Palma's sense of visual storytelling, rather than from the the solid, but admittedly standard script. Look at the opening sequence, which on the page surely read: "Girls getting dressed after gym class." But in a De Palma film, the mere act is literally transcended by a cosmic grace; time slows down, the post-pubescent grins linger and the undiscovered sexuality of the titular character comes forth with the presence of blood. The sequence is astonishing, but it truly is in service to both the establishment of a filmic world and a supplement to the characters and their behaviors and fears. De Palma is the rare filmmaker whose style over substance approach doesn't lose the humanity of his characters in the process (Hitchcock and Godard are also among the select few).

De Palma always wears the Hitchcock influence on his sleeve, which is no secret to anyone that watched but five minutes of any of his films. He's always framing characters within the frame, often while the character in the foreground has their back turned. This further indicates a self-contained world, where individual characters are caught listening, peeking or wondering. It's utterly self-reflexive, at its most basic function. The characters of the cinema construct their environment with a cinematic aesthetic. Even though filmmaking is never mentioned by them, somehow they are cognizant of this method of seeing. So, when Sue (Amy Irving) "sees" the bucket of blood lingering above Carrie's head, time slows down. She turns the corner, slowly realizing the horror that may spew forth if that bucket is dumped. The filmmaking reflects her inner turmoil. Then, when it's dumped, time speeds up. Now the point of view is with Carrie. The screen splits to mirror her fractured state, which has finally passed the point of no return. Her vision is coated in red, the monochrome indicating the vengeance she wants to enact. These are seamless techniques which turn Stephen King's original vision from banal horror to profound visceral masterwork.

De Palma's handiwork would be enough to make Carrie the great film that it is, but that it also features a half dozen iconic performances makes it truly timeless. Of course, Sissy Spacek plays the lonely, troubled Carrie White and it's likely the performance she's most remembered for today. Rightfully so; she's a fearless performer, that can hone in on the innocence that makes Carrie a sincerely pitiful character. But she has spunk too; she's resilient and Spacek makes that transformation all the more horrifying through that ability to hit so many varied notes. Then, there's Amy Irving, Nancy Allen, P.J. Soles and John Travolta, four of the coolest actors from the 1975-1985 De Palma period. Irving went on to make the equally great The Fury (1978), with De Palma, an her performance as Sue brilliantly contrasts the moral emptiness of Allen's and Travolta's characters. The film is able to hit so many beats with the characters, primarily because the performers are mesmerizing enough to not make a departure from Carrie a step down. It also makes their deaths all the more climactic. Then, there's P.J. Soles, who's now more known for her role in Halloween (1978), but has a memorable bit part as the ball cap wearing Norma. But, if you talk about performances in Carrie, it has to begin and end with Piper Laurie, whose Jesus freak mother is likely one of the ten scariest characters ever committed to film. The hammy Southern intonation, the frizzled hair, the searing eyes. Spacek's awkward character is sold by such a monstrous mother, whose past sexual fragility and betrayal has driven her to God and thus made the natural yearnings of her daughter a living hell.

The final scene between Carrie and her mother, ranks with the greatest De Palma ever filmed and thus ranks with the greatest of all film sequences. If you haven't seen the film, well, then you must behold its power, grace, horror, beauty -- sublimity for your self. I fear any attempted description would not do it justice and I am admittedly not capable of relaying its power on all of these levels. But don't get it twisted, it's a masterful piece of filmmaking, fit to end an equally magnificent horror film, one of the greatest ever made.

Posted by Clayton Dillard at 4:16 AM