THE INVENTION OF LYING - (Ricky Gervais and Matthew Robinson, 2009) 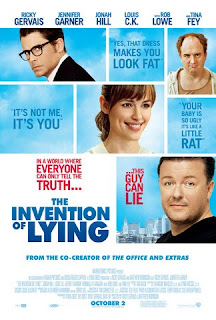 The Invention of Lying is in a Groundhog Day vein, but I would also compare it to Shallow Hal at least in terms of its comedic approach. Both of those are quite good and Ricky Gervais's co-directorial debut belongs somewhere in the discussion. It isn't as funny as Shallow Hal but it is a bit more perceptive and ambitious in subject matter. Yes, The Invention of Lying is about the birth of religion; the first instance where a man realized he could manipulate others by taking advantage of their earnest susceptibilities. Yet, interestingly enough for Gervais's film, the derivation of such a lie comes not from a fulfillment of self-interest, but the desire to ease the worries and suffering of a dieing loved one (though it does argue for the former, as well). It's a binary which is a crucial point when evaluating its 'condescension' factor. Gervais injects a fair amount into it, in assuming that only emotionally frail buffoons could be religious, but it never descends to pity or self-aggrandizing. The larger point it addresses rather astutely, is the manner in which fervent religious adherence to any specific doctrine, leads to a degradation of all things related to secular humanity. Gervais, an atheist himself, believes religion is the exploitation of the ignorant and uneducated by a more educated people with social and economic power (the film's ultimate premise), but it doesn't become a finger-pointing, 'wrong or right' affair. There's a definite degree of class and refinement to the piece. It ends on a fairly standard rom-com note, but in a way it plays to charm of it all. It displays a degree of humility for Gervais, something he hasn't shown previously. The Invention of Lying isn't propaganda, but a romantic comedy about death. Fact is, it examines death, as well as the human fear and uncertainty about it, intelligently. Whether or not one ultimately agrees with its assessments, isn't that all it can do?

Posted by Clayton Dillard at 12:59 PM