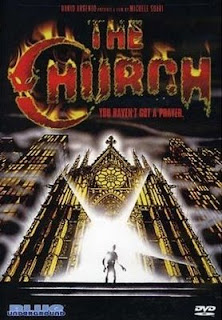 As a sort of bookend to Dreyer's Day of Wrath, there is The Church, conceived to be the third and final chapter of Dario Argento and Lamberto Bava's Demons trilogy; when Bava stepped down as director, Argento went with former AD Soavi, fresh off of his stellar debut Stagefright. The result is likely the best of the trilogy, though one could easily argue for the sheer glee of the original. While The Church might not be as crowd-pleasingly formulated, it is quite the formidable horror film and deftly a sense of kaleidoscopic terror, thanks primarily to the startling visual effects and a truly haunting score conducted by Philip Glass and performed by The Goblins.

The Church begins like all great horror, with a prologue; it's the 12th century and mass genocide occurs when many villagers are deemed to be under the control of witches. Immediately, Soavi's command over the composition and essence of his work is on display; while not containing the hollowed realism of snoozefests like Braveheart and Gladiator that are for some reason considered the standard, The Church takes a much more abstract approach. It establishes a sense of ethereal menace, as if horrible deeds are being performed by divine figures. The bulk of the film operates on this level. Of course, like its spiritual predecessor The Fog, the wronged return to wreak havoc on the living, as a cathedral is now built upon the site of the massacre. There isn't a whole lot of slaying and bloodshed in The Church, at least not in the manner one might expect. Yet this is responsible for much of the film's effectiveness. Like the admittedly superior The Fog, the terror derives from the tension of the possibility of bloodshed, not the actual act. The quick bursts of Glass's score when things do get messy are so positively inspired, that any lull in the story or lack of momentary tension is forgiven. The film ends nicely too, lingering on the shot of a young Asia Argento, a nice foreshadowing of what the future held for her and a solid capper on a pretty decent fright flick.

Posted by Clayton Dillard at 8:58 PM