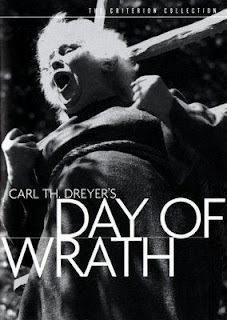 Carl Th. Dreyer’s witchhunt masterpiece Day of Wrath may not be considered a horror film by conventional standards; it doesn’t have masked slashers, hungry vampires or soul-seeking demons. No, its destructor is the worst and most horrifying villain of all: the church.

Set in 1623 Denmark, where anyone and everyone still believe witches are operating in opposition to the church, the narrative initially centers upon an elderly woman, accused of practicing witchcraft. The woman, herself, believes she may be a witch too, especially after she is physically tortured for a confession. The surrounding characters, being an older priest, his younger wife and his son, provide three contrasting moral stances that come into opposition after the elderly woman is burned at the stake. The young wife and the son fall in love, further jeopardizing and angering the strict social and 'moral' code set by their religion.

What Dreyer does exceptionally well, like Bunuel and Bergman after him, is use religion not as a mode for condescension and easy pot shots, but a serious and sincere examination of not just religious dogma, but mortality. It's unforgettable to watch the elder woman, Marte, beg for her life, even though she, herself, has been beaten into believing she is a witch, capable of rising the dead from the earth. It's juxtaposed with innocent children singing a hymn about death, bloodshed and penance. Such images and scenes belong in the greatest annals of film history. Dreyer certainly wasn't a happy-go-lucky man, but he was clearly in an on-going struggle to uncover the secret and truth of existence. He, like all others, comes up short, but his depiction of injustice as the worst form of inhumanity comes as close as anyone ever has to piercing the veil. 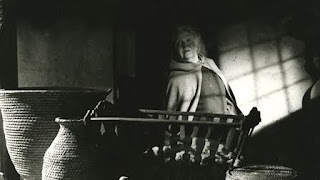 Posted by Clayton Dillard at 7:57 PM