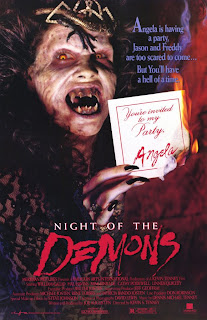 Here's yet another 80's horror flick that needs some midnight play; Night of the Demons manages to be both spoof and demon picture all at once. And guess what? Not once does it interpret spoof as direct referencing to other films. Though it certainly has fun with certain slasher character types (fat jock, old man, goth girls, token black guy, virgin but naughty heroine, etc.) there's never any direct attribution for the source. This is how pop culture should function; as assumed rather than explicit non-commentary on a genre.

Night of the Demons certainly isn't scary or even particularly interesting; however, the first 20 minutes are downright hilarious purely for the string of poor taste that's assembled. Lines like "those goddamn kids are going straight to hell" and "shut up and drive bitch" score big laughs. Also notable is the make-up effects. Try not to laugh out loud at a disappearing tube of lipstick trick. The last half hour is kinda boring, but it doesn't outweigh the sincerity and good cheer of the first hour. Get drunk and enjoy.

Posted by Clayton Dillard at 9:38 PM