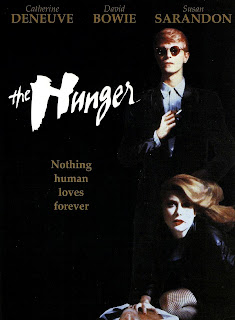 I hate the term guilty pleasure when referencing a movie; it implies that taste and quality don't always correlate, that someone could enjoy something fundamentally bad. Thus, I've never embraced its usage, though after seeing Tony Scott's The Hunger I may have to reconsider; here is a film so terrible and so terribly good looking, both in terms of visual style and its sensual implications, that any attempt to bash it outright would and should be met with trepidation.

No matter how inept Scott is at earnestly suggesting a correlation between his lead characters' lust for blood/sustenance and some sort of drug addiction/homosexuality, his verve as a purely visual filmmaker deserves to be at least mentioned, if not celebrated. But this is Scott in general. Only rarely, with Revenge and True Romance, has Scott been able to combine his aesthetic right with a suitable left, that being a narrative to match. Yet with The Hunger, Scott's pomposity is nearly as awe-inspiring as his wide shots of sunglass wearing, cigarette sucking vampires. His vamps are David Bowie and Catherine Denueve, no less; their artful mansion serves as a haven for the playing of classical music and distance staring while they await they're feeding. Involved too, is a doctor seeking a cure for aging, the equally stunning Susan Surandon.

Each shot Scott sets up fucking rocks; The opening 10 minutes, while absolutely laughable and preposterous, are edited so well, that the ludicrous lingering on flesh, blood and lipstick don't really matter. The Hunger is one of few rare instances where style can trump substance and not render itself inadequate. It doesn't hurt either, to have a wonderfully sexy 'scène de lesbiennes' featuring Denueve and Surandon, both of whom get completely naked! How is this scene not as famous as the sweaty fuck in Don't Look Now or the whispery make-out in Mulholland Dr.? I can't say, and even though The Hunger never amounts its allegory to anything other than utterly offensive implications, you, uh, you should still check it out.

Posted by Clayton Dillard at 6:42 PM