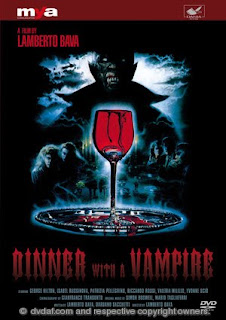 After recently watching A Blade in the Dark and Delirium: Photos of Gioia, both directed by Lamberto Bava, his Dinner With a Vampire plays like a toned down kitsch-fest. Whereas his others were much meaner yet steeped in the usual European gender deconstruction (when in doubt, guess a cross-dressing brother/friend with a lifelong crush on the final girl) his vampire tale is the kind of soft and playful stuff that, while it maintains one's interest, is essentially just an exercise in expressing the director's fondness for the horror film and the innocuous ones at that. A group of actors and models seeking fame are lured to a mansion upon the promise of fame and notoriety. Upon their arrival, they learn their host is actually a real vampire, intent on harvesting the nubiles for sustenance. No where in Dinner With a Vampire is there any sense of true danger lurking or that a vicious streak with ever start to build strength. That said, there's something to Bava's honest presentation of the material and it speaks to his love for the genre that he never allows his winking joy to become too self-serving. It's no show-stopper, but given the right circumstances, Dinner With a Vampire could conceivably provide a someone seeking a good bit of fun just that.

Posted by Clayton Dillard at 7:13 PM