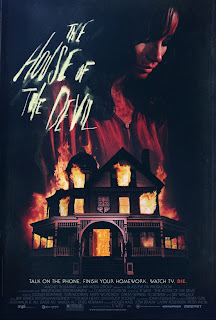 Almost too late to make much of a mark, Ti West's horror homage The House of the Devil arrives on the back end of a decade of spoofs and tributes and throwbacks and callbacks and post-post-modernism, that I fear it's astuteness will be overlooked. Those who do dismiss what West has done here would be remiss, since his nasty little film evokes the dread of post-Vietnam horror, if it's short on those films political subtext. It isn't quite the best horror film of the year either (that honor belongs to Jaume Collet-Serra's grossly overlooked Orphan) but what it does, it does exceedingly well, which is remain a small, effective chiller that reserves its real bite for the last 15 minutes.

West understands that horror must first be grounded in a real world before it can become frightening. That's precisely what he does. Samantha (Jocelin Donahue) is a struggling college sophomore, looking to move out of her dorm room and away from her sexually promiscuous roommate. But in order to do that, she needs some cash. Insert crux of plot: she answers an add for a babysitter, whose offer ultimately isn;t what it appeared, but given the creepy old man (Tom Noonan) is willing to pay $400 for Samantha to watch after his sickly mother for an evening, she reluctantly accepts. This all happens around the 30 minute mark, as The House of the Devil is taking its time, building slowly to the payoff. The irony is, an effective horror film makes the preceding material just as interesting, if not more so than the horror. It does just that; Samantha's economic struggles are confronted with a moral dilemma and the necessity she has for money trumps any sort of moral or precautionary thought process. She has, in a sense, already sold her soul to the devil.

The film is sly too; subtle insertions that will later be recalled for plot purposes are important and deftly placed. Yet as the film relates to its roots, it isn't overt in such intentions. Surely, there are freeze frames during the opening credits and the lettering is straight from The Last House on the Left, but that's about all the film explicitly shares in common with such predecessors. The importance here is the narrative structure and character, as well as a few nicely executed sequences to ratchet up the stakes. Hell quite literally breaks loose in the last 15 minutes, but even then The House of the Devil doesn't loose its cool; understated rather than overt, the final image/reveal reflects the tone and philosophy of West's filmmaking; insinuate rather than explicate.

Posted by Clayton Dillard at 7:45 PM