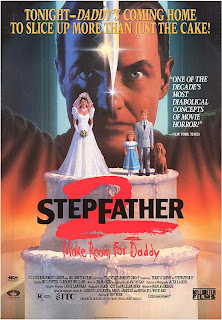 The best thing about a horror sequel is that it can take the original idea and endlessly multiply the inanity. In the case of Stepfather II, this is done organically instead of through easy camp. Locked in an insane asylum since after murdering a family more than a year ago, Jerry Blake (Terry O'Quinn) seems to have vanquished his insanity. Yeah right. After stabbing a doctor through the back of his neck and beating a guard with his own nightstick, he's out into the world, seeking a new family to settle in with.

The aforementioned form of the sequel delves deeper into Blake's obsession with the old-fashioned family. That is, it has fun with his psychosis, but the lampooning remains within the confines of its filmic world. This is how spoof should function. Not through banal one-liners or knowing acknowledgement of its own self-awareness. It should address the obvious in that it is a film, but provide a well-constructed narrative in which to play it out. Stepfather II does this quite well; see Blake's disgust with whiny, promiscuous or working women. Also, after getting engaged, he insists upon waiting until the wedding night to have sex! Awesome, right? It's awesome because of the understated political subtext. Progressive ideals vs. conservatism. Conservatism is inherently misogynist and leads to illogical primitive reaction to difference. That is to say, with violence. The sophistication of Stepfather II will go unnoticed by those who would rather focus on its "stupidity," but true cinema lovers will relish all of its seedy, adept glory.

Posted by Clayton Dillard at 6:14 PM