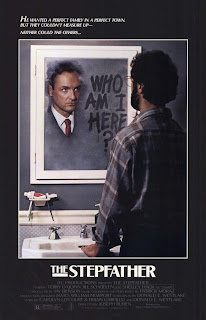 The Stepfather is a great genre horror film. It has all the components to meet that qualification, namely a delightfully terrorizing/psychotic performance by Terry O'Quinn, and a great addition to the horror discourse on the "family," begun by such classics as The Last House on the Left and The Texas Chainsaw Massacre. If The Stepfather is slightly lacking in the latter department, it compensates with dynamic little scenes between characters, hilarious bits of business and a general sense of the death of pastoral America.

An unfortunate PG-13 remake (unseen by me) no doubt homogenizes and tarnishes the sharp genre tropes and a genuine feeling of the transition of societal mores. Relish a campy, but heartfelt scene where the psychotic Quinn sentimentally watches a young family, who greet the father as he arrives home from work. It has an air of surrealism, his illogical and idealistic family hierarchy now usurped by unruly kids, transgressing boyfriends and distrustful wives. His lament is met, though, with unblinking brutality, not realizing that his actions equally go against the grain of communal trust. To read it as a Reagan-era parable may stretch it (but weren't all mid-80's flicks just that?) but whichever way one views it, The Stepfather is truly worth seeking out.

Posted by Clayton Dillard at 8:26 PM